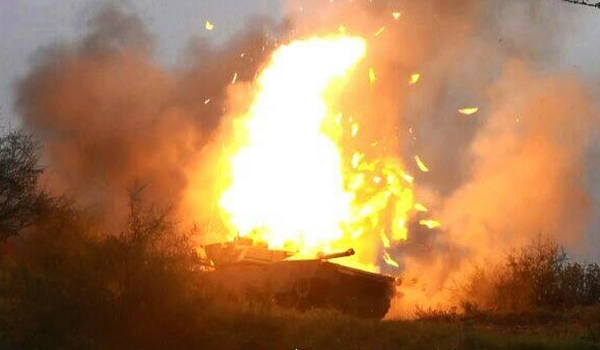 RNA - At least 100 tanks and armored vehicles of the Saudi army were destroyed after Yemen's ballistic missiles hit Ein al-Thourin military base in Najran province in the Southern part of the kingdom.

The military bases which are located in the Western part of al-Rabou'a city were taken after intense clashes between the Yemeni and Saudi forces.

The images released after the operation showed the Saudi military men leaving their armored vehicles and fleeing the battlefield.

Also, the artillery units of the Yemeni army targeted the gathering centers of Saudi-affiliated militia at Koufel military base in Ma'rib which killed and wounded tens of them.

On Friday, Yemen's long-range home-made missile dubbed as Borkan-1 (Volcano-1) hit deep inside Saudi Arabia in response to the kingdom's massacre of civilians in the impoverished nation.

Borkan-1 has a range of 800 kilometers and is a new generation of Yemen's domestically-made missiles, Yemen's Defense Ministry announced in a statement on Friday.

The Yemeni defense ministry did not mention the exact location of the targets that Borkan-1 missile has hit.

It, however, said that the warhead of Borkan-1 missile has been designed to destroy the Saudi military base structure with respect to the materials used in their construction.

On Wednesday, the Yemeni army and popular forces hit the Saudi military positions in the kingdom's Najran province with a Zalzal-3 ballistic missile in retaliation for the Saudi airstrikes on residential areas across Yemen.

Tags: Yemen Missile Saudi
Short Link rasanews.ir/201m6X
Share
0
Please type in your comments in English.
The comments that contain insults or libel to individuals, ethnicities, or contradictions with the laws of the country and religious teachings will not be disclosed