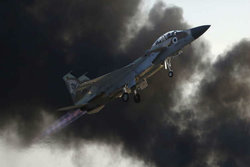 Israel’s airstrikes in Syria only add to the tensions and destabilize the situation in the region, Russian Foreign Ministry Spokeswoman Maria Zakharova said on Thursday.

RNA - "We are concerned over Israel’s continued practice of delivering unilateral airstrikes on the Syrian territory in violation of the sovereignty of neighboring Arab nations," she stated, according to TASS.

"The latest such attack was staged by Israeli warplanes on March 5 from Lebanon’s airspace. As a result, one Syrian soldier was killed and more than ten were wounded," Zakharova added.

"We are convinced that such arbitrary military actions undermine regional stability and heighten tensions," she stressed.

Syrian army, residents block US military convoy, force it to retreat in Hasakah