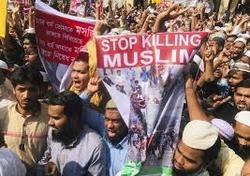 RNA - Protesters gathered around the national mosque after Friday prayers and then proceeded to march through the city's streets, chanting slogans and beating effigies of Modi with their shoes. Protesters attempted to march to the Indian High Commission but were stopped by riot police.

Local media estimated that around 5,000 people participated in the march.

Modi is scheduled to visit Dhaka on March 17, but recent communal violence against Muslims in neighboring India has sparked calls for the visit to be canceled.

Last week, at least 44 people were killed and hundreds injured in the worst communal riots in the Indian capital in decades, triggered by clashes between supporters of a new citizenship law and those against it.