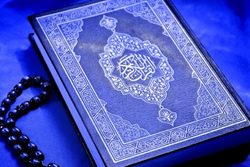 A Saudi publishing house supposedly specializing in releasing various translations of Muslims' holy book Qur’an has printed an error-ridden Hebrew version of Islam’s holy book including some egregious alterations and even omissions.

RNA - The copy was issued by the King Fahd Complex for the Printing of the Holy Qur’an (MEMO), which is based in the holy city of Medina, the London-based Middle East Monitor news website reported on Tuesday.

Though it has been “approved by the Saudi authorities,” the version contains “more than 300 errors,” ranging from mistranslations to deliberate omissions, it reported.

MEMO said some of the errors in the apparently “Judaized” copy “appear to support Israel’s narrative over its claim to Palestine and al-Aqsa Mosque.”

The translation leaves out the name of Prophet Mohammad (PBUH), including where the holy book describes the Prophet of Islam’s miraculous overnight journey from the holy city of Mecca to the al-Aqsa Mosque.

Across the Saudi version, the name of the Mosque is also mistranslated into “The Temple,” the Jewish name for the site. The copy also writes in parenthesis after references to “The Temple” that the site is the same place where “the Temple of Suleiman (a Prophet of the Israelites)” is located.

The Palestinian Shehab News Agency was one of the outlets alerting the public to the errors. It published a video, which warned about the “doctrinal implications” that are conveyed in the Saudi copy.

The errors could create “the impression that the Islamic holy text itself endorses a fundamentalist Jewish reading of history,” MEMO wrote.

The al-Aqsa Mosque’s compound is Islam’s third holiest site, but bears significance for Jews and Christians too.

Israel has, however, been widely denounced for trying to gradually gnaw away at Muslims' and Christians' rights to the site since 1948, when it claimed existence after overrunning huge swathes of Arab territories.

The efforts have gained political momentum under Benjamin Netanyahu, Israel’s longest-running prime minister. During his tenure, the regime signed off on a law calling itself “the nation-state of the Jewish people.”

The US, already Israel’s biggest and most dedicated ally, took greater strides to endorse the regime’s occupation under President Donald Trump.

In late 2017, Washington recognized Jerusalem al-Quds, which contains the al-Aqsa Mosque, as Israel’s “capital,” although Palestinians want the holy city’s eastern side as the capital of their future state.

Saudi Arabia, which enforces the extremist Wahhabi ideology at home, has been drawing itself closer to both Tel Aviv and Washington over the past many years, while gradually slackening its support for Palestinians.

Riyadh is considered to be at the vanguard of the Arab states warming up to Israel. Back in 2002, the kingdom put forward a controversial “Arab peace initiative,” which proposed “normalization” of relations with the regime if it withdrew from Palestinian territories.

In April 2018, Saudi Crown Prince Mohammed bin Salman was accused of “recognizing” Israel after saying that “the Israelis have the right to have their own land.”