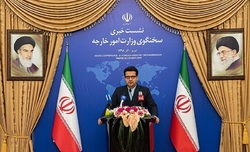 The spokesman for Iran’s Foreign Ministry slammed the early assessments by some ‎Western media officials that a Ukrainian airliner carrying dozens of civilians have been shot ‎down in the Iran.‎

RNA – The spokesman for Iran’s Foreign Ministry slammed the early assessments by some ‎Western media officials that a Ukrainian airliner carrying dozens of civilians have been shot ‎down in the Islamic Republic, saying Tehran has invited Kiev to take part in the investigation, ‎according to Tasnim News.‎

In a statement on Thursday night, Sayyed Abbas Mousavi reacted to “the suspicious moves” ‎by the West to create a negative atmosphere against Iran and said the country is ‎investigating the incident in adherence to international standards.‎

The spokesman further said Iran has invited Ukraine and Canada to participate in the ‎investigation, which will be conducted according to the International Civil Aviation ‎Organization’s regulations.‎

The remarks came as some American, Canadian, and British officials said Thursday the cause ‎of the jet’s crash was a missile fired from Iran in the hours after the country had launched ‎other missiles at bases housing American troops.‎

All 179 people on board the Boeing 737, including nine crew, were killed when the jetliner ‎crashed shortly after takeoff from the airport on Wednesday morning.‎

The plane operated by Ukraine International Airlines (UIA) was bound for Kiev.‎

Tags: Iran Ukraine Canada Plane crash
Short Link rasanews.ir/201sfD
Share
1
Please type in your comments in English.
The comments that contain insults or libel to individuals, ethnicities, or contradictions with the laws of the country and religious teachings will not be disclosed