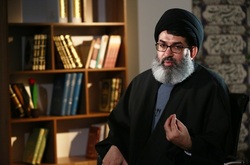 Hujjat al-Islam al-Haydari said, “Most disrespectful is the arrogant American presence on a ‎land that is not theirs, and in spite of that, they bomb, kill and attack the official sacred ‎Popular Mobilization Forces.”‎

RNA – Hujjat al-Islam Sayyid Hashim al-Haydari, an Iraqi cleric and the head of the Popular ‎Mobilization Forces in Iraq, issued a statement on a rocket attack on an Iraqi military base.‎

American officials say an “American civilian contractor” has been killed in, what they describe ‎as, a rocket attack targeting an Iraqi military base housing American and Iraqi forces in the ‎Arab country’s north.‎

Reuters cited the officials as saying that the alleged fatality had been caused on Friday, ‎December 27 at the outpost, which is located near the city of Kirkuk.‎

Several American service members and Iraqi personnel were also wounded in the reported ‎incident, the agency added, citing a American-led military coalition, which has stationed itself ‎in Iraq under the pretext of fighting the Takfiri terror group, Daesh.‎

The following is a statement from Hujjat al-Islam al-Haydari on the issue:‎

‎“So should anyone aggress against you, assail him in the manner he assailed you, and be ‎wary of God, and know that God is with the Godwary.” [The Holy Quran, 2:194]‎

Most disrespectful is the arrogant American presence on a land that is not theirs, and in spite ‎of that, they bomb, kill and attack the official sacred Popular Mobilization Forces, justifying ‎their aggression and then flaunting before the public their admission of committing this ‎heinous crime.‎

Yes, when the Iraqi government and the Iraqi armed forces do not respond to Israel’s ‎bombing of the Popular Mobilization Forces’ offices several months ago, the enemies will ‎dare to take further steps. ‎

The Commander-in-Chief of the Armed Forces must take bold measures in the national ‎interest to protect the blood of Iraqis and achieve full sovereignty for Iraq. The Council of ‎Representatives must rise up with a national unified legal uprising that would end the sinister ‎American presence on the homeland.‎

It would be suitable if the innocent peaceful protesters’ would unite their voices against the ‎unjust American presence perched on the land of Iraq.‎

The correct patriotism is aiming the nozzles, voices and pens against the true enemies of the ‎homeland. ‎

The United States’ aggression against the Popular Mobilization Forces is one of a series of ‎episodes of the American “Joker” conspiracies against Iraq.‎

God-willing, the brave from amongst the sons of Iraq will shake the earth under the feet of ‎every arrogant and unjust.‎