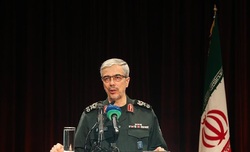 The Chief of Staff of the Iranian Armed Forces Major General Baqeri ‎congratulated his Christian counterparts on the occasion of Christmas and the New Year.‎

RNA – In separate messages to his Christian counterparts on Tuesday, Major General ‎Mohammad-Hoseyn ‎ Baqeri congratulated them on the birthday anniversary of Jesus Christ, ‎‎“the messenger of peace and friendship,” and on the beginning of the new year in the ‎Gregorian calendar.‎

‎“Undoubtedly, the return of humanity to the blessed teachings of the great prophets of God ‎and strengthening of the spirit of friendship, empathy, and interaction among nations would ‎bring about the establishment of global peace and stability and humanity’s inclination to truth ‎and justice,” the message read.‎

According to Tasnim News Agency, the top commander further wished his counterparts health and success and the people and ‎armed forces of their countries prosperity.‎

Christmas or Christmas Day is an annual commemoration of the birth of Jesus Christ, ‎celebrated generally on December 25 as a religious and cultural holiday by millions of people ‎around the world.‎