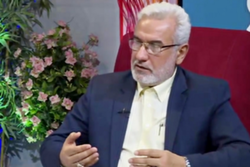 Mr. Jabar Saidawi said, “The United Kingdom, the United States, Wahhabis and Zionists ‎have inflicted fatal blows on the Shi’ah religious authorities (the sources of emulation) ‎and the fatwas of these authorities.”‎

He said that by shaking off popular beliefs, the Zionist-Western-Arab media seeks to ‎change popular beliefs about the religious authorities and stated, “If we continue with ‎such a trend and lack of proper culture-building and proper and necessary actions, we ‎will certainly see more difficult problems. Our media is becoming more active and is ‎informing the Iraqi people of the enemies’ great sedition because if they didn’t do this, ‎this great sedition wouldn’t be known by the oppressed Shi’ahs of Iraq.”‎

He said, “While occupying Iraq at the present time, the United States tells the Iraqis ‎that their country is occupied by Iran and for this reason, some Iraqis have chanted the ‎slogan ‘Out, out Iran! Free, free Baghdad!’ and believe that they are an Iranian colony. ‎Currently, the electricity, oil and security files are in the hands of the Americans and the ‎British and the Iraqis can’t do anything without American approval.”‎
‎ ‎
Mr. Saidawi referred to the grumbling and uneasiness of the Americans in regard to the ‎Popular Mobilization Forces (PMU) and said, “The acceptable performance and ‎satisfaction of the Iraqis with the expansion of security, success in politics, resistance ‎against the United States, and the formation of the grumbling after the fatwa issued by ‎Ayatollah al-Sistani are among the major reasons for the American and Western ‎opposition to Popular Mobilization Forces.” ‎

He said, “With its clever political presence, the United States tried to contain or slow ‎down the religious authorities and was successful in this regard. The United States is ‎striving to prevent the issuance of fatwas about protecting security or promoting ‎economic and political issues. In this regard, Western media outlets have diminished ‎the power of the religious authorities in various fields by producing very strong media ‎content and having good communication with the audience.”‎
‎
Rasa News Agency

Tags: Saidawi Iran Iraq Media Sistani
Short Link rasanews.ir/201sYS
Share
2
Please type in your comments in English.
The comments that contain insults or libel to individuals, ethnicities, or contradictions with the laws of the country and religious teachings will not be disclosed