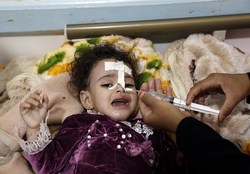 Yemen’s humanitarian situation continues to worsen. Now Yemeni hospitals are warning that they lack basic equipment and supplies to deal with an increasing number of patients.

RNA - According to estimates hospitals across Yemen are working with only 7 percent of the needed medical equipment and supplies.

In a presser held on Wednesday, Yemen’s Minister of Health Dr. Taha Almutwakil revealed some shocking figures about child mortality in Yemen.

He said 400-thousand children die each year in the country, mostly due to direct and indirect consequences of the Saudi war.

He added that the lack of medical equipment and supplies was one of the main reasons behind the children’s death.

Yemen’s health ministry says only one-fifth of the international medical aid pledges have been fulfilled.

Over the past three months, more than 25 thousand people with chronic diseases have died as a result of the Saudi blockade on Yemen despite a 2018 truce agreement which calls for the opening of humanitarian corridors for the movement of aid.

One year has passed since the Yemeni warring parties agreed to a ceasefire at the Sweden peace talks. The agreement was deemed a breakthrough in the negotiations but Yemenis are still waiting to see if it comes into effect completely.