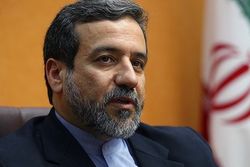 Iranian Deputy Foreign Minister Seyed Abbas Araqchi slammed Washington’s unilateral policies and the European Union’s lack of commitment to the 2015 nuclear deal, officially known as the JCPOA, warning that the time for diplomacy is running out.

RNA - In a Thursday meeting with Russian Deputy Foreign Minister Sergei Ryabkov in Moscow, Araqchi lashed out at the US’ one-sided policies and Europe’s failure to fulfill its commitments after Washington’s withdrawal from the JCPOA, and said, “If Iran’s demands are not met, the Islamic Republic will continue to reduce its JCPOA commitments based on its right enshrined in Article 36 of the accord, and no one should doubt Iran’s resolve to do that.”

The Iranian diplomat stressed that the path for diplomacy is still open.

“However, this path is getting narrower and more impassable every day, and the countries remaining in the JCPOA should know they have little time, if they are serious about maintaining the deal,” he warned.

In the four-hour meeting, the Iranian diplomat referred to French President Emmanuel Macron’s initiative to save the accord, and said Iran always welcomes any idea and initiative that can contribute to the peaceful resolution of the crisis.

However, he added, “such initiatives are acceptable only if they are balanced and realistic and serve Iran’s interests under the JCPOA.”

The Russian diplomat, for his part, blasted Washington’s withdrawal from the multilateral agreement, and described it as a stark violation of the UN Security Council Resolution 2231.

“Russia supports the JCPOA as a great achievement of multilateralism and will keep in touch with other JCPOA parties in order to save the deal,” Ryabkov noted.

On Wednesday, Iranian Foreign Ministry Spokesman Seyed Abbas Mousavi said that his country is pessimistic about Europe's capability to adopt measures which can dissuade Tehran from taking the fourth step to modify its nuclear deal undertakings.

"The Europeans have not yet adopted any special measure, particularly in area of crude sales, banking interactions, transportation and insurance, which convinces us not to take the fourth step," Mousavi said.

He added that Iran is not optimistic that the Europeans can do anything special which can dissuade the country from scaling down its nuclear deal undertakings.

Mousavi blasted Europe for tying their nuclear undertakings to relations between Iran and the US, adding that it is impossible.

In relevant remarks on Monday, Mousavi cautioned that Tehran was in a final stage of decision-making to further modify its nuclear deal undertakings if Europeans kept failing to deliver on their promises.

Mousavi said that Tehran has designed the next step of cutting its commitments under the nuclear deal of 2015, officially known as the Joint Comprehensive Plan of Action (JCPOA), and is ready to take it in the absence of practical measures by Europeans to salvage the deal.

“The fourth step [in reducing commitment to JCPOA] has been designed,” he said Monday in his weekly presser, adding that some of the measures of this step are yet to be finalized.

“We hope that we would not arrive at the fourth step and that Europeans would meet their obligations; if not, Iran will go ahead with taking the fourth step,” he added.

“We were assuming that they [Europeans] did not have the will [to honor their JCPOA commitments] but now we see that they are not capable of doing so … we will continue to reduce our commitments under the JCPOA unless they fulfill their part of commitments.”

Earlier this month, Spokesman of the Atomic Energy Organization of Iran (AEOI) Behrouz Kamalvandi announced that only two other steps had remained for his country to end the nuclear deal undertakings if the Europeans still continue insistence on not meeting Tehran's demands.

“Only two more steps will end all of Iran’s JCPOA undertakings and will return the country to the pre-JCPOA conditions,” Kamalvandi said in an interview with the state TV.

“As soon as the Fordow nuclear site comes into operation for uranium enrichment and the number of centrifuge machines rises, Iran will practically have no more commitments to the JCPOA and only the monitoring issues will remain,” he noted.

Kamalvandi added that Iran's stockpile of enriched uranium and the number of centrifuge machines are growing and the Europeans and the US are concerned about reduction of the Islamic Republic's JCPOA commitments.

“Thanks to the pressure of world major powers, we are able to easily manufacture the best centrifuges,” he said, adding that Iran would have faced many problems, including in the pharmaceutical industry, without progress in the nuclear industry over the past decades.

Mousavi also said earlier this month that his country had devised plans and was getting ready for undertaking its next step of scaling down commitments under the nuclear deal of 2015.

"Iran has prepared the required plans for the fourth step of scaling back its JCPOA commitments," Mousavi said, adding that the 4th step is most likely to be undertaken as the European signatories of the agreement are unable to deliver on their promises without a prior permission issued by the US President Donald Trump.

“Europeans have not been successful to meet their JCPOA commitments and have tied all of their decisions and measure to Trump’s confirmation,” he said, adding, “Iran has its own plan and its own predictions and if the Europeans remain impotent, Iran will take the fourth step.”

Tehran has rowed back on its nuclear commitments three times in compliance with articles 26 and 36 of the 2015 deal.

Iran says its reciprocal measures will be reversible as soon as Europe finds practical ways to shield the Iranian economy from unilateral US sanctions which were imposed last year when President Donald Trump withdrew from the 2015 nuclear deal.

Iranian Government Spokesman Ali Rabiyee said last month that his country was determined to take the fourth step to modify its nuclear deal undertakings unless the Europeans do their obligations under the JCPOA.

"Our move towards to the third step depends on the other side's compliance with its undertakings and Tehran's satisfaction with the Europeans' fulfillment of their obligations," he added.

Rabiyee warned that Iran will take a "strong" step if Europe fails to use the remaining opportunity to implement its JCPOA undertakings.

According to Fars News Agency, Washington withdrew from the internationally-endorsed 2015 nuclear deal with Iran on May 2018, re-imposed the toughest-ever sanctions against the country and started a plan to zero down Tehran's oil sales.

The Iranian officials had earlier warned that the European Union’s failure in providing the needed ground for Tehran to enjoy the economic benefits of the nuclear deal would exhaust the country's patience.

Iranian Nation Immune to US Plots