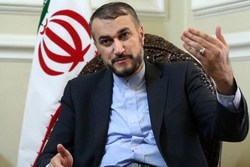 Senior Advisor to the Iranian Parliament Speaker Hossein Amir Abdollahian said on Tuesday that Israel’s presence in an anti-Iran conference in the Bahraini capital city of Manama showed that the ruling regime of the tiny island will have a short life-span.

RNA - “Manama Security Conference with the participation of the illegitimate Israeli regime will help end the Al Khalifa regime,” Amir Abdollahian wrote in a post on his Twitter account today.

The official called on the Bahraini regime “to review its short history and think about the future of the region more rationally”.

“Definitely, Al Khalifa's Zionist Regime has no place in the future of the region,” he added.

The remarks came as Bahrain is co-hosting a so-called security conference in Manama in collaboration with the US and Poland. It is a follow-up to the US-led anti-Iran conference held in the Polish capital city of Warsaw in February 2018.

Tel Aviv has sent a delegation to the anti-Iran conference.

Iran has blasted Bahrain for hosting “suspicious and provocative meetings," calling on the regime in Manama to stop acting as “a facilitator of enemy plots” in the region.

Israel has full diplomatic ties with only two Arab states, Egypt and Jordan, but recent reports suggest Tel Aviv has been working behind the scenes to establish formal contacts with other Arab countries such as Bahrain.

On Monday, Iranian Foreign Ministry Spokesman Seyed Abbas Mousavi categorically dismissed Manama’s recent accusations about Tehran's involvement in the smuggling of explosives to the tiny Persian Gulf island, describing the claim as worthless and based on illusions.

Mousavi’s remarks came after last week remarks of Bahraini Foreign Minister Sheikh Khaled bin Ahmed Al Khalifa who accused Iran of meddling in the tiny Persian Gulf island’s internal affairs, claiming that Iran has been behind the transfer of a large number of explosives to his country.

Late in August, Amir Abdollahian had seriously warned the Al Khalifa regime which is running an autocratic rule in Bahrain to avoid pinning hope on Israel which is itself nearing its final collapse.

“Al Khalifa has kept aloof from Bahrainis to the extent that it has taken a usurped, broken and sinking Israeli ship for its survival,” Amir Abdollahian wrote in a tweet, harshly rebuking the Arab country’s Foreign Minister Khalid bin Ahmed Al Khalifa for acting as “a spokesman” for Israel.