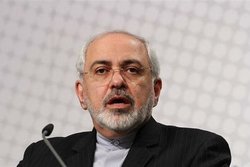 Foreign Minister Mohammad Javad Zarif says Iran will welcome Saudi Arabia's change of policy “with open arms” if it comes to the realization that it cannot buy security though arms purchases and extra-regional help.

RNA - “We have always said that we seek understanding with our neighbors and we are not after tensions,” Zarif told reporters on Wednesday on the sidelines of a cabinet meeting.

“If the Saudi government comes to the conclusion that it cannot provide its security through arms purchases and delegating its sovereignty to the others and moves toward [promoting relations with the countries of] the region, it will definitely be met with Iran’s open arms,” he added.

Zarfi made the remarks in response to a question about reports that Saudi Arabia had given the green light to a third country to arrange a meeting with Iran.

This came a day after an Iraqi official said that Saudi Arabia had agreed that Iraq’s Prime Minister Adil Abdul-Mahdi help set the stage for a meeting with Iran.

“The Saudis have given the green light in this matter, and Mr. Abdul-Mahdi is working on it,” Abbas al-Hasnawi, an official in the Iraqi premier’s office, told the Middle East Eye (MEE) news portal on Tuesday.

He said that the Iraqi premier was mediating between the leaderships in Riyadh and Tehran and had communicated each side's conditions for talks to the other.

Last week, Abdul-Mahdi held talks with Saudi officials during a visit to Jeddah. After the trip, the Iraqi premier told Al Jazeera that Saudi Arabia was looking to de-escalate tensions with Iran.

Meanwhile, earlier this week, the spokesman for Iranian President Hassan Rouhani's administration said that Saudi leaders have been sending messages to Iran's president through a head of state, though refraining to give any details on the nature of those messages.

Ali Rabiei made the remarks during his weekly press briefing in Tehran on Monday, when he was asked about reports denoting that the Saudi leadership has been sending messages to Iran's chief executive.

“Yes, this is true that they have sent messages to Mr. Rouhani through a head of state,” Rabiei noted, adding, “We must see signs of it [Saudi’s goodwill] without any ambiguity, and the first sign of it is to stop the aggression against Yemen and put an end to the massacre of Yemenis.”

Meanwhile, Adel al-Jubeir, the kingdom’s minister of state for foreign affairs, has denied that Saudi Arabia had sent messages to Iran’s president through other countries.

The remarks came amid heightened tension between Iran and Saudi Arabia over the latter’s accusations that Iran was involved in the September 14 air raids on two Aramco installations, which were claimed by Yemen’s Houthi Ansarullah movement.

Iran has rejected the allegations of any involvement and said the attack was a legitimate act of self-defense by Yemen, which has been under incessant strikes by the Saudi-led coalition since 2015.

Elsewhere in his remarks, Zarif was asked about a four-point document brokered by French President Emmanuel Macron on reducing tensions between Iran and the US. He said the plan does not reflect the stances of the Islamic Republic correctly.

“The four-point plan brokered by Macron is the one that is [written] in his language and does not include   our viewpoints. We have clarified that the Islamic Republic of Iran is not after nuclear weapons,” Zarif said.

“Iran’s stances are not properly reflected in Macron’s four-point. It is essential that negotiations should continue so that the issues will be clearly reflected. We will keep our contact and we are in contact with France,” the top Iranian diplomat said, stressing that the French president was “earnestly” following up on the issue too.

Macron has been seeking to play a mediatory role aimed at easing Washington-Tehran tensions, which have been on the rise since the US withdrawal from a 2015 multilateral nuclear deal in May 2018.

Shuttling between Iran and the US in a bid to forge a deal to ease tensions, Macron brokered a four-point document in New York, where he attended the 74th session of the United Nations General Assembly and reportedly tried to broker a meeting between the Iranian American presidents.

Macron’s document states: “Iran will never acquire a nuclear weapon” and will “fully comply with its nuclear obligations and commitments and will accept a negotiation on a long-term framework for its nuclear activities.” It would also “refrain from any aggression and will seek genuine peace and respect in the region through negotiations.”

Also as part of the plan, the United States would agree to “lift all the sanctions re-imposed since 2017” and “Iran will have full ability to export its oil and freely use its revenues,” according to the text.

Zarif said that Tehran’s move to reduce its commitments under the 2015 nuclear deal was a remedial act in response to US violations and the Europeans’ failure to ensure that Iran would reap the befits of the deal.

He stressed that Iran has not violated any of the agreed clauses of the agreement, officially known as the Joint Comprehensive Plan of Action.

In response to the US’s withdrawal from the JCPOA and its reimposition of sanctions, Iran has so far rowed back on its nuclear commitments three times in compliance with articles 26 and 36 of the deal.

Tehran, however, says that its retaliatory measures will be reversible as soon as European signatories to the accord find practical ways to shield the mutual trade from the US sanctions.