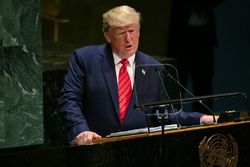 On September 26, US President Donald Trump delivered a speech at the UN General Assembly, once again preaching the concept of America First and denying the significance of globalization and international law.

RNA - Trump's third address to the United Nations General Assembly was an unmistakably nationalist one, with reiterating the theme of his foreign policy doctrine, that all nations should be looking inward and considering their own interests first. He focused more on criticizing other nations that he believes treat the US unfairly than on uniting nations around principles of democracy and humanity.

Trump hit on each of his favorite themes – Iran, unfair trade, imbalanced defense spending, illegal immigration, and socialism - reading from the teleprompter in a somewhat subdued manner. He said, "The future does not belong to globalists. The future belongs to patriots."

At any rate, Trump likes the UN General Assembly platform. On the one hand, the UN headquarters is located in New York, and Trump can go home when he visits the UN, enjoying the owner's treatment in the Trump Tower in Manhattan. On the other hand, he likes to speak in front of many audiences. At the UN General Assembly, politicians from all countries became Trump's audience.

On the contrary, the United Nations does not like the US under Trump. The Trump administration has withdrawn from several UN agencies and international treaties such as climate change and medium-range missiles. In addition, the United States owes more than a billion US dollars in contributions to the United Nations.

Trump's America First concept contradicts the values of the United Nations, denying the broad consensus of the international community to pursue common development through cooperation and to solve global problems through shared responsibility. This contrast reflects the limitation of Trump's diplomatic philosophy. The concept of America First has internal contradictions and cannot solve the vast majority of problems in today's world.

One of the contradictions is that the US hopes that countries will capitulate under pressure and adopt a similar concept of isolationism and reduce the supply of public goods to the international community. Peace does not occur naturally. In order to maintain peace, major powers need to assume certain international responsibilities and provide assistance to vulnerable countries to help them solve the root causes of terrorism and extremism.

The reduction in the supply of public safety products will make it easier for some countries to become a source of global turmoil and attract anti-civilization forces to establish bases in these countries. This change may not be apparent immediately. But in the near future, we may see the rise of new terrorist organizations and transnational criminal groups.

Another contradiction is that the US does not want to be bound by rules and treaties, but requires other countries to abide by the rules. The US walked out of the nuclear deal but still expects Iran to remain in the UN-endorsed treaty. The concept of America First is a category of power politics.

According to Fars News Agency, Trump believes that the strength of the United States is the main reliance on its security. Once there are rules that limit US power or unfair for US interests, the US government will seek to revise these rules. At the same time, the Trump administration does not allow other countries to propose changes to existing international rules. This makes other countries feel like they are being unfairly treated and slows down the evolution of international law.

Finally, the Trump administration advocates dialogue and dignity, but tends to use unjustified means such as maximum pressure to resolve the contradiction between Iran and the US. In his speech, Trump said that he is trying to talk and listen to everyone, including North Korea, Iran and other leaders of countries that have long disagreed with the US. The fact is that the Trump administration has imposed unilateral economic sanctions, cyber attacks and military threats against these countries, which have seriously affected their ordinary citizens.

In the face of such double standards and conflicts, these countries are questioning the US's true intentions and its credibility to fulfill its commitments. Other countries do not like this disgraceful strategy to resolve differences. They believe that they may also become the object of blackmail by the US. Accepting US blackmail will not only hurt the interests of these countries, but also expose their governments to enormous social pressure. No wonder Iran says it will only talk to the US once sanctions are lifted.