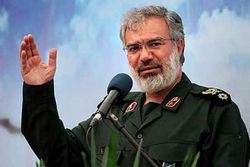 RNA - “Despite the imposed sanctions of Yemen’s military industry, the country has been able to bring Saudis to their knees,” Rear Admiral Fadavi told reporters on Sunday.

He pointed to the recent successful military operations by Yemeni forces against the Saudi army in Najran province, and said, “Resistance frontline is powerful now in the region and enemies acknowledge its power.”

He noted that if the enemies attack Yemen, they will sustain serious losses and this shows Yemenis’ power of deterrence.

In a relevant development on Saturday, a spokesman for the Yemeni Armed Forces announced that a major military operation was launched by the Yemeni army dubbed Nasr Min Allah in Southern Saudi Arabia.

He noted that thousands of Saudi troops have been captured in Nasr Min Allah military operation.

The spokesman for the Yemeni Armed Forces said that "three Saudi brigades were destroyed during Operation Nasr Min Allah in the Najran region in the south of Saudi Arabia”.

He reiterated that "this operation is continuing for several months and during this time our enemies have suffered a lot of casualties”.

US sanctions on Iran's access to medicines tantamount to economic terrorism: FM Zarif