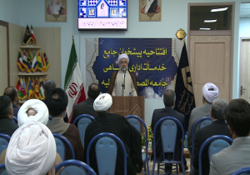 The Comprehensive Counter for Administrative and Welfare Services at al-Mustafa International University in Qom was inaugurated in the presence of a number of provincial and federal government officials.

RNA – The opening ceremony for Comprehensive Counter for Administrative and Welfare Services for the non-Iranian seminarians of al-Mustafa International University in Qom was held on Thursday, August 29th, according to the correspondent of Rasa News Agency.

A number of officials from the university, selected students and provincial and federal government officials attended the ceremony.

At this ceremony, a mobile application to provide welfare services to the seminarians of al-Mustafa International University was also unveiled.

The ceremony also honoured Brigadier General Gholamreza Rezaianfard, the Chief Inspector General of the Law Enforcement Force, and Brigadier General Mohammad Babaei, the head of the Intelligence and Public Security Police, for their sincere cooperation in providing services to non-Iranian seminarians.

Speaking at the ceremony, Hujjat al-Islam Dr. Ali Abbasi, the dean of al-Mustafa International University, appreciated the efforts of those involved in the launching of the service, including the Centre for Services of the Islamic Seminaries, the law enforcement and other departments and said, “The Centre for Student and Family Affairs of al-Mustafa International University is one of the most serviceable and effective departments of the university as it provides a relaxed and suitable environment for non-Iranian seminarians to engage in academic and cultural activities around the clock.”

He emphasized the international background of the Islamic Seminaries from the distant past until the present era and said, “The Islamic Revolution marked a turning point in the history of the Islamic Seminaries and today we are witnessing widespread changes in quantity and quality. Although the spread of the teachings of pure Islam and the Ahl al-Bayt throughout the world remains the primary objective of al-Mustafa International University, the small costs involved in this sector are in fact a valuable investment in other parts of the country.”

Hujjat al-Islam Abbasi considered adhering to the three principles of speed, ease and the protection of dignity as necessary to provide services to non-Iranian seminarians and added that the launching the Comprehensive Counter for Administrative and Welfare Services can be very effective in this regard.”

Tags: al-Mustafa MIU Welfare Seminary
Short Link rasanews.ir/201sED
Share
0
Please type in your comments in English.
The comments that contain insults or libel to individuals, ethnicities, or contradictions with the laws of the country and religious teachings will not be disclosed