Arba’in produces hope in the hearts of humankind 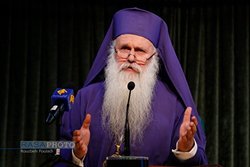 Archbishop Songulashvili emphasized that the Arba’in pilgrimage produces hope in the ‎hearts of humankind and said, “The pilgrimage from Najaf to Karbala was full of love ‎and fellowship.”‎

RNA – Speaking at a specialized conference entitled “Husayn in Christian Thought” ‎which was held at Tehran’s Imam Sadiq University, Archbishop Dr. Malkhaz ‎Songulashvili, the head of the Evangelical Baptist Union of Georgia, explained the ‎experiences that he had during the Arba’in pilgrimage to the Holy Shrine of Imam al-‎Husayn in the Iraqi city of Karbala and said, “I am a Christian and a follower of Jesus ‎Christ but I think that the message of Imam al-Husayn has many lessons, one of which ‎is not remaining silent in the face of injustice.”‎

The pastor at Cathedral Baptist Church in Tbilisi added, “If we love Imam al-Husayn ‎and want to follow him, we must resist the spread of hatred throughout the world.”‎

He pointed out that religion can guide people toward a peaceful life and said, “Religion ‎leads us to tolerance but we can’t suffice with just tolerance but rather we must move ‎toward a life full of love.”‎

Archbishop Songulashvili referred to the cruel martyrdom of Ali al-Asghar, the six-‎month-old son of Imam al-Husayn and said, “When a father lifted his six-month-old ‎baby up with the objective of asking for water and the enemies targeted the child’s ‎throat instead of giving him water, those killers were nothing but evil.”‎

The Georgian pastor continued, “The story of Karbala teaches us that people with ‎power don’t have the right to supress others. For this reason, today the story of Imam ‎al-Husayn is very important. My experience on the path between Najaf and Karbala was ‎one of the deepest experiences that I’ve ever had. The Arba’in pilgrimage had a ‎miraculous impact on the life of humankind.”‎

He made an excerpt from his Arba’in memoirs and said, “I attended the Arba’in ‎pilgrimage with the same vestments as I’m wearing now and I was welcomed by those ‎who were also participating in this commemoration.”‎

Archbishop Songulashvili continued, “Everyone brought me everything they had, and ‎that sense of friendship and hospitality was very interesting to me because I was ‎neither a resident of that country nor their religion, but I was welcomed by them and It ‎was a loving reception.‎

Archbishop Songulashvili pointed out that Muslims and Christians make up half of the ‎world’s population, “A future full of peace and harmony is in our hands. Christians and ‎Muslims can keep the world alive through the teachings of Imam al-Husayn.”‎