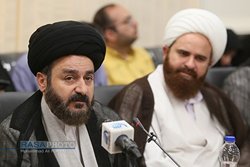 Referring to the Statement on the ‎Second Phase of the Islamic Revolution as a leading ‎document, the teacher in the Islamic Seminary of Qom emphasized, “The Supreme Leader’s ‎attention to academia and research in this statement is accurate and evaluative.”‎

Speaking at the conference, Hujjat al-Islam Sayyed Mojtaba Mirdamadi, a teacher of ‎philosophy in the Islamic Seminary of Qom, said that the Statement on the ‎Second Phase of ‎the Islamic Revolution was a leading document for executive agencies and legislative bodies ‎and can be used as part of a serious agenda to the extent of the law.‎

Noting that some parts of this statement contains important and serious points, the member ‎of the World Assembly of Shi’ah Studies said, “Some parts of this statement have focused ‎on academia and research. In accordance with the directives of the Supreme Leader, ‎academic work and research has been initiated because academic work and research must ‎always be up-to-date and the Islamic Seminaries have done good work in this regard.”‎

He emphasized, “Another issue is the issue of spirituality and morality, that is to say, ‎spiritual intelligence and moral conscience must be expanded in society, an important part of ‎this conscience is through the noble teachers who are active in the field of religion and the ‎Islamic Seminaries.”‎

Hujjat al-Islam Mirdamadi noted that the media can play a role in the issue of spiritual ‎intelligence and moral conscience and added, “This issue will be a good place to implement ‎spirituality.”‎

His Eminence emphasized, “Another issue that comes out of this statement and is related to ‎the Islamic Seminaries is the economic issue. In this regard, we have good theories and ‎views and executive agencies must properly consider the economic complexes of the ‎country in consideration to the progressive views of economic leaders who have studied the ‎economy through a religious perspective.” ‎

Hujjat al-Islam Mirdamadi said, “There has been good work in the area of justice and in the ‎fight against corruption. The new activities of the judiciary are promising, but more ‎importantly, they can properly eradicate the roots of corruption by considering the Islamic ‎perspective and legal frameworks that automatically combat corruption.”‎

Tags: Mirdamadi Second Phase Conference
Short Link rasanews.ir/201sDL
Share
0
Please type in your comments in English.
The comments that contain insults or libel to individuals, ethnicities, or contradictions with the laws of the country and religious teachings will not be disclosed