‎30 Kashmiri seminarians have been arrested 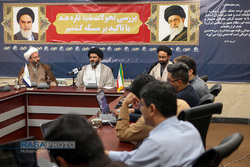 Sayyed Mousavi‏ ‏added, “The Indian government has even arrested some of the seminarians ‎and clerics ‎studying in Iran such that, according the latest statistics we have obtained, about ‎thirty ‎seminarians are in jail and the rest are being pursued or under strict monitoring.”‎

RNA – An academic conference entitled “Developments in the Indian Subcontinent with an ‎‎‎‎‎‎Emphasis on the Kashmir Issue” was hosted by Rasa News Agency at the headquarters ‎‎of ‎‎‎the ‎news agency in Qom. ‎

Speaking at the conference, Sayyed ‎Ali Reza Mousavi, an expert and political activist in ‎Kashmir, also criticized the Bharatiya Janata Party (BJP), the current ruling party in India, ‎saying that the Rashtriya Swayamsevak Sangh (RSS) group is similar to Wahhabi groups and ‎has there difference between them. ‎

The political expert on Kashmir ‎said, “When we look at the situation in Kashmir, we find that ‎the RSS is gradually seeking to shift our culture in an attempt to take over the education in ‎Kashmir. In this area, we’ve even seen the establishment and operation of several large ‎schools by the Zionist occupation regime which are aimed at changing the culture of the ‎people, such as the requirement for girls to enroll in grade nine, not wearing hijab and ‎wearing shorts.”‎

He added, “The Indian government has even arrested some of the seminarians and clerics ‎studying in Iran such that, according the latest statistics we have obtained, about thirty ‎seminarians are in jail and the rest are being pursued or under strict monitoring.”‎

Sayyed Mousavi said, “The Kashmir that we call paradise has now become hell and the ‎Indian government has arrested more than 600 media activists in order to prevent news ‎from being broadcast from the region.”‎