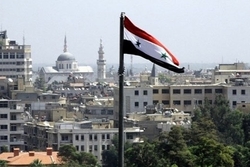 The Syrian army rapidly advanced in a major offensive in Northern Hama, breaking the terrorists' defense lines in the region.

RNA - The Syrian army forces, supported by the artillery and missile units, continued clashes with Tahrir al-Sham al-Hay'at (the Levant Liberation Board or the Al-Nusra Front) terrorists, regaining control of the two towns of Abu Raiedeh and West Abu Raiedeh as well as al-Arawi, al-Aziziyeh and al-Ray farms.

The Syrian army rapidly advanced in a major offensive in Northern Hama, breaking the terrorists' defense lines in the region.

The Syrian army forces, supported by the artillery and missile units, continued clashes with Tahrir al-Sham al-Hay'at terrorists, regaining control of the two towns of Abu Raiedeh and West Abu Raiedeh as well as al-Arawi, al-Aziziyeh and al-Ray farms.

He added that tens of terrorists were also killed in the operations.

Meantime, The Syrian army hit a heavy blow at Tahrir al-Sham terrorist group's defense lines in the town of al-Latamineh in Northern Hama, forcing the militants to flee their most important headquarters in the region.

The Syrian army forces continued clashes with Tahrir al-Sham terrorists in the Eastern parts of the town of Tal Malah in Northern Hama on Thursday, retaking control of Wadi Hasmin region and the farms near the town of al-Zakah.

Meantime, a military source said that the Syrian army troops have regained control of Wadi Hasmin region, broken the first defense line of Tahrir al-Sham from al-Zakah and opened a new front towards the town of al-Latamineh as the militants' key base in Northern Hama.

He added that a large number of terrorists were forced to flee al-Latamineh as the army is advancing in the region.

The source also said that a group of 17 militants were killed in clashes in al-Zakah, adding that the army forces targeted the terrorists' supply lines in Hasraya and al-Arbaeen with artillery fire.

Meantime, the Syrian air force launched heavy attacks against the terrorists' positions in al-Latamineh, Kafr Zita, Latmin and Dawir al-Akrad in Northern Hama, destroying several of their bases and military vehicles and killing the militants inside.

The Turkish army and affiliated militants attacked Kurdish positions in Northern Aleppo amid sending new military convoys to the border with Syria.

According to Fars News Agancy, the Kurdish-language Hawar news reported on Wednesday that the Turkish forces targeted the Kurdish positions in the towns of Soqankeh, Miaseh and Zarnaiteh near Afrin region in Western Aleppo with over 180 mortar attacks.

Also, the Turkish army and affiliated militants attacked the town of Harb and several nearby towns in al-Shahba region in Northern Aleppo with artillery fire.

Meantime, the London-based Syrian Observatory for Human Rights (SOHR) reported that heavy clashes have erupted between the Ankara-backed terrorists and the Kurdish militia near the towns of Harbal and Sheikh Issa in Northern Aleppo.

Concurrent with the events, the Turkish army sent new military convoys, consisting of tens of vehicles carrying military equipment to the borders with Syria near the towns of Ra'as al-Ein and Tal Abyadh in Hasaka and Raqqa provinces.

Also, the Arabic-language Step news website affiliated to militants reported that several Turkish reconnaissance planes have flown over the town of Manbij.