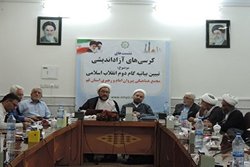 The seminary and university teacher said that no other revolution in the world could provide ‎a revolutionary system-like theory and sustain itself ‎for forty years. ‎

Hujjat al-Islam Mohajerinia ‎added, “Today, in political science, not only don’t they consider ‎the Islamic Revolution as sacred but also a kind of illness and instability in society but our ‎revolution, with its slogans and its anti-imperialist and anti-colonial goals and functions, is ‎sacred because it has its roots in eternal humanity and divine nature.”‎

Tags: Mohajerinia Second Phase Islamic Revolution Khamenei Iran
Short Link rasanews.ir/201s3Y
Share
1
Please type in your comments in English.
The comments that contain insults or libel to individuals, ethnicities, or contradictions with the laws of the country and religious teachings will not be disclosed