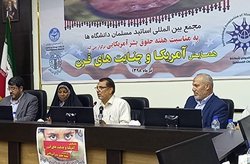 A professor at the University of Tehran said the Deal of the Century ‎is a sinister plan to ‎engross Muslim countries in conflict with one another‎ while the identity of Palestine is al-Quds ‎‎(Jerusalem).‎

RNA – Speaking at a conference entitled “The United States and the Crimes of the Century” ‎that was held on the occasion of the American Human Rights Week and with the initiative of ‎the International Assembly of Muslim Teachers at Amirkabir University of Technology in ‎Tehran, Hoseyn Royvaran, a professor at the University of Tehran, said, “There are two ‎principles in the Charter of the United Nations, one of which is the determination of destiny, ‎which is the right of all nations, and it’s interesting that in this regard, the Palestinians are the ‎only community that isn’t allowed to have an independent state.”‎
‎ ‎
He explained that Israel is legally acting with the people of Palestine in a racist manner and ‎stated, “In the present system of the world, there are dozens of resolutions for the ‎Palestinian people that must be officially recognized by the people of Palestine.”‎
‎ ‎
He added, “Israel doesn’t even accept the to give twenty percent of the West Bank to the ‎Palestinians and makes an attempt to engage in theft every moment.”‎
‎ ‎
Mr. Royvaran pointed out that the West is seeking to stabilize Israel in the region and said, ‎‎“In the Oslo Accords, land was declared over peace in order to recognize Israel. This plan, ‎which was scheduled to be executed over five years, would not only expel Zionists from the ‎West Bank, but set up dozens of Jewish settlements.”‎

Mr. Royvaran ‎argued that the creation of a Palestinian state in the Gaza Strip was one of the ‎goals of the Deal of the Century ‎but the identity of Palestine is al-Quds (Jerusalem) ‎and this ‎is a sinister plan and said, “The Deal of the Century ‎is very polished and is meant to engross ‎Muslim countries in conflict with one another.” ‎