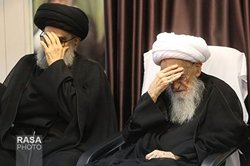 Mourning ceremonies marking the martyrdom of Imam Ja’far al-Sadiq, were held at the ‎homes and offices of the sources of emulation in Qom. ‎

RNA –‎‏ ‏On the twenty-fifth day of the Islamic month of Shawwal [June 29th], mourning ‎ceremonies marking the martyrdom anniversary of the sixth Infallible Imam of the Shi’ah ‎school of thought, ‎Imam Ja’far ibn Muhammad ‎al-Sadiq, were held in the presence of ‎scholars, seminarians, clerics and various groups of people at the homes at offices of ‎various sources of emulation in the Iranian holy city of Qom. ‎

According to Shi’ah sources, the Imam was poisoned by Mansour al-Diwaniqi on Shawwal ‎‎25th, 148/December 14th, 765 CE] in Madinah and passed away as a result.‎

The mourning ceremonies of the Shi’ah religious authorities were held at the offices of at the ‎offices of Ayatollahs Hoseyn Vahid-Khorasani, Lotfollah Safi-Golpaygani, Naser Makarem-‎Shirazi, Seyyed Musa Shobeyri-Zanjani, Hoseyn Nouri-Hamadani, Ja’far Sobhani Abdollah ‎Javadi-Amoli and other scholars.‎
‎ ‎
In these ceremonies, the sources of emulation, along with other groups of people, mourned ‎over the martyrdom of Imam al-Sadiq and conveyed their condolences over this tragedy to ‎the Imam of the Time, Imam al-Mahdi.‎
‎ ‎
A mourning ceremony for Imam al-Sadiq was held at the office of the Supreme Leader of ‎the Islamic Revolution, Ayatollah Khamenei, in Qom with the participation of scholars, ‎clerics, seminarians and various classes of people.‎
‎ ‎
In these ceremonies, the speakers explained the virtues of Imam al-Sadiq and eulogists also ‎read eulogies and lamentations in honour of the Imam.‎
‎ ‎
As with previous years, Ayatollah Vahid-Khorasani also held a mourning ceremony at his ‎office which was attended by seminarians, clerics, scholars and various groups of people.‎
‎ ‎
From the door of his office door on Safayeh Street, participated in a march with a group of ‎mourners, and conveyed his condolences on the martyrdom of the head of the Shi’ah school ‎of thought to Lady Fatimah al-Ma’sumah.‎

At the end of the commemoration, Ayatollah Vahid-Khorasani met with the lovers of the ‎Purified Imams and participated in mourning for Imam al-Sadiq.‎

Also on these days of mourning, Qom, the sanctuary of the Ahl al-Bayt had different ‎atmosphere and the people of this holy city, by holding mourning ceremonies and the ‎establishment of mourning groups, engaged in mourning.‎
‎ ‎
People attended the Holy Shrine of the Lady Fatimah al-Ma’sumah and the Holy Jamkaran ‎and mourned for Imam al-Sadiq and offered their condolences to the “Karimah Ahl al-Bayt” ‎‎[The Benevolent Lady of the Ahl al-Bayt] and Imam al-Mahdi.‎