Enemies’ airports will be targeted until Sana’a siege ends: Ansarullah 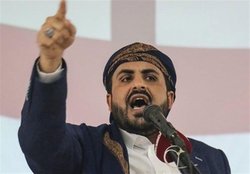 The spokesman for Yemen’s Houthi Ansarullah movement says the airports of countries involved in the devastating military aggression and blockade against his impoverished homeland will be targeted as long as the embargo imposed by the Saudi-led coalition on Sana'a International Airport remains in place.

RNA - “We had repeatedly informed the United Nations about the health condition of [the Secretary-General of the Union of Popular Forces] Mohamed Abdel Rahman al-Rubai, who required treatment abroad. Unfortunately, the world body gave in to Saudi Arabia’s demands, and could not do anything to lift the siege on Sana'a Airport,” Yemen’s Arabic-language al-Masirah television network cited Mohammed Abdul-Salam as writing on his official Twitter page on Sunday.

The Houthi spokesman added, “This is something that cannot be tolerated at all.”

“Given the criminal siege on Sana'a International Airport and the failure of the UN to take proper measures [aimed at resolution of the issue]…, the countries of the (Saudi-led) aggression must know that their airports are within our firing range as the attacks would be the most efficient way to end the blockade,” Abdul-Salam pointed out.

A Yemeni military source, speaking on condition of anonymity, said at the time that the aerial attack had been carried out following close surveillance by Yemeni forces.

The development came a day after Yemeni soldiers and fighters from Popular Committees launched a drone into the same Saudi region, targeting military aircraft hangars at the airport.

Saudi Arabia and a number of its regional allies launched a devastating campaign against Yemen in March 2015, with the goal of bringing the government of former Yemeni president Abd Rabbuh Mansur Hadi back to power and crushing the Houthi Ansarullah movement.