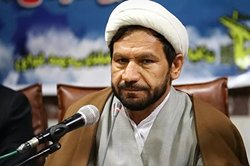 Rasa – The commander of Imam Sadiq Brigade announced holding of the first National ‎Conference of the Flagbearers of the Islamic Revolution and ‎Pioneers of the Holy Defence ‎with the presence of prominent figures from the Iranian government and Islamic Seminary‎.‎

RNA – Hujjat al-Islam Ezzatollah Motamed announced the holding of the first National ‎Conference of the Flagbearers of the Islamic Revolution and Pioneers of the Holy Defence ‎with the presence of prominent figures from the Iranian government and Islamic Seminary.‎

He said that the conference will be held on Sunday, June 9 and added that Ayatollah Alireza ‎Arafi, the director of the Islamic Seminaries of Iran, and Major General Sayyed Yahya Rahim ‎Safavi, the former chief commander of the Islamic Revolutionary Guard Corps (IRGC), will ‎speak at this conference. ‎

Rasa News Agency had a short discussion with Hujjat al-Islam Motamed ‎on the details of the ‎National Conference of the Flagbearers of the Islamic Revolution and the Holy Defence and ‎they are as follows:‎

Describe the circumstances of this conference?‎

Regarding the importance of this conference, he said that since November 2018, the ‎headquarters of the 83th Imam Ja’far al-Sadiq Brigades, composed of sub-institutions such ‎as the Centre for the Management of the Seminaries, the Deputy of the Graduates of the ‎Seminaries, the Islamic Propagation Office, the Centre for Services of the Islamic Seminary, ‎the Centre for the Publishing of Works and Values of the Holy Defence and other seminary ‎institutions has been established which are the executive organs of the secretariat of this ‎headquarters of four committees, such as the Media and Propagation Committee, the ‎Physical Protection Committee, the Support Committee, and the Invitation and Invitees ‎Committee.‎

What is the purpose of this conference?‎

The conference has several goals of which the most important of them can be outlined ‎below:‎

‎1.‎ To protect the relationship between the clerics of jihad and martyrdom with each ‎other

‎2.‎ To protect ‎and link the pioneering clerics of the Sacred Defence.‎

‎3.‎ To create a reliable and strong spiritual link and the transfer of jihadi culture and ‎martyrdom to the current generations in the Islamic society, especially to the young ‎scholars in the Islamic Seminary. ‎

‎4.‎ To protect and maintain the relationship between the clerics with the “virtuous tree” ‎of the Islamic Revolutionary Guard Corps (IRGC).‎

‎5.‎ To record and transmit the epics, courage and memories of the pioneering clerics of ‎the Sacred Defence.‎

‎6.‎ To explain and outline the role of leading clerics for the Islamic society.‎

In conclusion, he thanked all the seminary institutions that have been working hard to hold ‎this conference.‎
‎ ‎
Rasa News Agency

Tags: Motamed Seminary Iran Flagbearers
Short Link rasanews.ir/201rq2
Share
0
Please type in your comments in English.
The comments that contain insults or libel to individuals, ethnicities, or contradictions with the laws of the country and religious teachings will not be disclosed