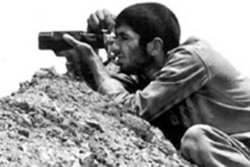 Rasa – A conference entitled, “The Media, Sacred Defence and Resistance” was held at the ‎conference hall of the Directorate of the Ministry of Culture and Islamic Guidance of ‎Qom ‎Province.‎

RNA – A conference entitled, “The Media, Sacred Defence and Resistance” was held on May ‎‎22nd with the support of the Media Basij at the conference hall of the Directorate of the ‎Ministry of Culture and Islamic Guidance of Qom Province.‎
‎ ‎
Speaking at this media meeting, Sayyed Musa Hoseyni-Kashani, the head of the Directorate ‎of Ministry of Culture and Islamic Guidance of Qom province, and Reza Rahimi-Tanha, ‎Meysam Aghajanpour, and Ali Bitarafan, filmmakers on subject of the Sacred Defence [Iran-‎Iraq War], expressed their memories of the Sacred Defence ‎era and the Defence of the Holy ‎Shrines in Syria and Iraq.‎

Mr. Hoseyni-Kashani‎ referred to the role of the media in promoting the culture of the Sacred ‎Defence in his remarks and said, “Many young people have not understood the Sacred ‎Defence era and therefore, the media must engage in strong efforts to increase the ‎understanding of this era among the younger generation.”‎

Mr. Aghajanpour, the director of the documentary “For Nubl, For al-Zahra,” spoke about the ‎background of the documentary, stated, “When the presence of the team of Martyr Mortaza ‎Avini in the theatres of operations was announced during the Sacred Defence, a group of ‎propagandists came but today it is seen that the films of this group are the best documents ‎for promoting the culture of the Sacred Defence era.”‎
‎ ‎
Mr. Bitarafan said that the Sacred Defence era has had a lot of bittersweet memories for the ‎people of that era and added, “Today, the war is over, but the events of that era are ‎supposed to be transmitted by cameras to generation today. In other words, today the ‎camera can be likened to a weapon.”‎
‎ ‎
Mr. Rahimi, a photographer during the Islamic Revolution and Sacred Defence eras, pointed ‎to the hardships of filming and photography during the Sacred Defence, saying, “During the ‎Sacred Defence, there were not enough facilities for photography or filming, but today there ‎are many possibilities and they must be used appropriately.”‎
‎ ‎
In conclusion, Reza Rahimi-Tanha, Ali Bitarafan, and Meysam Aghajanpour were appreciated ‎as prominent filmmakers of the Sacred Defence era and the Defence of the Holy Shrines by ‎the Media Basij and the Ministry of Culture and Islamic Guidance of Qom Province.‎

The Iran-Iraq War, called the “Sacred Defence” in Iran, was an armed conflict between Iran ‎and Iraq, beginning on September 22nd, 1980, when Iraq invaded Iran, and ending on August ‎‎20, 1988, when Iran accepted the UN-brokered ceasefire.