We will not enter into political games ‎ 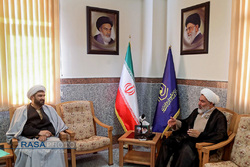 Rasa – Hujjat al-Islam Bahjatpour‎ ‎said, “I will not allow the Women’s Seminaries to take on ‎a essence other than the essence of leadership and we will be careful not to enter into ‎regressive political games.”‎

RNA – In a meeting with Hujjat al-Islam Mohaqqeqi, the director of Rasa News Agency, and ‎a group of officials of this media organization, Hujjat al-Islam Abdolkarim Bahjatpour, the ‎director of the Women’s Seminaries of Iran, praised its valuable activities.‎

Hujjat al-Islam Bahjatpour‎ referred to his plans and actions since he accepted the ‎responsibility to oversee the Women’s Seminaries of Iran and noted that attention to quality ‎and avoidance of quantitative development is considered an important principle in ‎management and added, “We have a sufficient number women’s seminaries at various levels ‎and we now have to focus on solving some of the problems and activities that may have ‎been harmful, changing some aspects and preparing for a change in terms of content.”‎
‎ ‎
He described one of the shining examples of the women seminarians the recent floods in the ‎provinces of Golestan, Khuzestan and Lorestan and said, “In the town of Pol-e Dokhtar ‎‎[Lorestan], the women’s seminary was turned into a centre for flood relief efforts and the ‎principal of the seminary sold his gold and personal belongings and sent the money to help ‎the flood victims. Similar incidents also occurred in other areas of the country.”‎

He also noted that the school-centered approach is another approach and action of the ‎Women’s Seminaries and said, “We believe that the women’s seminaries must go forth from ‎the schools and headquarters to serve the schools and we need to structure the real work in ‎schools.”‎

Hujjat al-Islam Bahjatpour said, “In regard to the entrance exam this year, the seminaries ‎don’t have an objective to attract the maximum number of students and we have also ‎changed the selection system and the time of registration and we hope that we can achieve ‎the desired changes in the women’s seminaries and theological schools.”‎
‎ ‎
In another part of his speech, the director of the Women’s Seminaries of Iran emphasized ‎that in regard to political issues, the seminaries must not become the political clubs of ‎parties and movements and said, “We believe that the seminaries ‎must be political and ‎follow the Supreme Leader of the Islamic Revolution [Ayatollah Khamenei] and according to ‎his indications but it must not take on the colour of parties and movements.”‎
‎ ‎
His Eminence also explained the mission of the Islamic Seminaries in regard to the statement ‎issued by the Supreme Leader on the Second Phase of the Islamic Revolution, and ‎emphasized that the Islamic Seminaries must find its role and position in this statement and ‎said, “In my opinion, this statement is a visionary statement and the Islamic Seminaries ‎must act in accordance with this statement.”‎

Hujjat al-Islam Bahjatpour ‎noted, “By issuing this statement, the Supreme Leader, with all his ‎experience and presence in the events and thoughts, acted in a manner that many of the ‎organizations couldn’t have done.”‎
‎ ‎
His Eminence said, “In line with the statement on the Second Phase of the Islamic ‎Revolution, our work must be committable and of course be measurable.” ‎
‎ ‎
He also referred to the issue of the Islamic lifestyle, which is one of the pillars of the ‎statement of the Second Phase of the Islamic Revolution, and said, “In this regard, we must ‎know the issues and variables, then assess them, and then, with regard to the serious ‎variables of the lifestyle, we must compile them.”‎
‎ ‎
Hujjat al-Islam Bahjatpour ‎stressed one of the effects of revolutionary action is not to ‎surrender to the arrogant powers and said, “The biggest duty of the Islamic Seminaries in ‎the Second Phase of the Islamic Revolution is to protect and demonstrate our valuable ‎religious identity against the arrogant powers.”‎

Referring to Ayatollah Mortaza Motahhari, a late Iranian cleric, philosopher, lecturer, and ‎politician who is considered as having an important influence on the ideologies of the Islamic ‎Republic of Iran, His Eminence stated, “The Islamic Seminaries ‎must be the Motahhari of ‎their time, know the issues, resolve the crises and be the focal points of the women. ‎Generalizations aren’t beneficial.”‎
‎ ‎
He added, “We believe that the women’s seminaries must find their own issues and in this ‎arena we need the assistance of the media and news agencies, especially Rasa News ‎Agency.”‎

Hujjat al-Islam Bahjatpour ‎referred to the issue of media conferences and said, “In regard, ‎we have such meetings at the Centre for the Management of the Islamic Seminaries. Our ‎emphasis is to have the doors of the women’s seminaries open for specialized disciplines.”‎
‎ ‎
The director of the Women’s Seminaries of Iran also announced that the ‎Centre for the ‎Management of the Islamic Seminaries was fully prepared to cooperate with Rasa News ‎Agency in various fields and said, “We consider the issue of engagement with the media and ‎news agencies to be a serious matter and at the same time we believe that the women’s ‎seminaries should be exposed to criticism in order to be seen.”‎