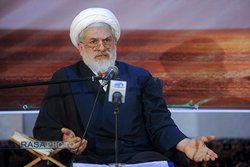 RNA – Speaking at the first part in a series of conferences entitled “The Decline of the United ‎‎States of America” which was held at Hazrat Zaynab Mosque in Pardisan, Qom, Hujjat al-‎‎Islam ‎Sa’id Bahmani said that in an individual manner, we won’t see the fall of a civilization ‎like that of the United States and said, “Speaking of the decline of the civilization of the ‎United States doesn’t mean that we have failed to understood the American civilization.”‎

The member of the Scientific Council of the Cultural and Educational Research Centre of the ‎Holy Quran continued, “Just in terms of military weapons, the United States has 17 times as ‎many weapons as all of Europe, that is, they can swallow the whole of the European Union. ‎Therefore, when we speak of the decline of such a power, it doesn’t mean we don’t ‎understand it.”‎

Referring to the words of the Supreme Leader of the Islamic Revolution, Ayatollah ‎Khamenei, in the context of the decline of the United States, he said, “We believe that the ‎Supreme Leader sees something that others don’t see. Just as we sought such a issue from ‎Imam Khomeyni. Just few years before the collapse of the Soviet Union, he promised its ‎collapse and today, we aren’t talking from ourselves, but from the statements of the ‎Supreme Leader.”‎
‎ ‎
Hujjat al-‎Islam ‎Bahmani ‎continued, “On April 25, 2006, the Supreme Leader said during a ‎meeting with former Sudanese President Omar al-Bashir ‘The arrogant powers headed by the ‎United States have grown weaker and weaker over the past years. Based on divine ‎providence, when powers become arrogant and rebellious, their decline and downfall will ‎begin.’”‎

The teacher in the Islamic Seminary of Qom noted, “In 2018, the Supreme Leader said ‎‎‘those who are inclined towards compromise know that the United States is in decline.’ This ‎sentence has been chosen as the most memorable sentence on the Supreme Leader’s ‎website. Successorship, substitution, destruction and the tradition of destruction are part of ‎the traditions that tell of the scale of civilization, i.e., the people will collapse.”‎
‎ ‎
Referring to the divine subordination, he said, “The Holy Quran warns all human beings that ‎the tradition of successorship is ongoing, meaning it’s the tradition of God which moves all ‎the people. Another verse expresses successorship by addressing the disbelievers. This is ‎expressed in the Chapter of Hud, verse 57.”‎

Hujjat al-‎Islam ‎Bahmani added, “The reminder to the successors in the address to the ‎believers is expressed in two forms, glad tidings and warning. God gives both glad tidings ‎and warnings but doesn’t promise anything to the believers.”‎
‎ ‎
The Iranian scholar also referred to Ayatollah Khamenei’s statement of the Second Phase of ‎the Islamic Revolution and added, “In the first paragraph of the statement on the Second ‎Phase of the Islamic Revolution, the Supreme Leader speaks in regard to the nation and the ‎nation that he speaks to has a unique revolution. In continuation, he refers to the decline of ‎the ‘centres of animosity’ and uses two terms – ‘inevitable demise’ and ‘throes of death.’”‎
‏ ‏
He said, “If you don’t believe in your greatness and you don’t see the decline of your rival, ‎you will face problems and won’t seek to combat it. The Supreme Leader states that, ‎against all the temptations where resistance seemed impossible, they would protect their ‎dignity and continue to enter the second phase of self-building ‎and the building of society ‎and civilization, which are the three components of the basic recommendations to confront a ‎declining civilization.”‎
‎ ‎
Hujjat al-‎Islam ‎Bahmani‎ stated that decline has three stages, “We are currently in the third ‎stage and even if there is no sign of a decline in civilization and we’re in the pre-decline ‎phase, we must continue to work toward self-building and the building of society and ‎civilization‎ and after the collapse, self-building is a means of differentiation, which, if this ‎distinction isn’t determined, there wouldn’t be any difference from falsehood.”‎

It is worth mentioning that the series of conferences on the decline of the United States has ‎been organized by Rasa News Agency and is founded on three axes – economic decline, ‎military decline and political decline, which have been neglected by the public.‎