Ex-European officials demand rejection of US ‘deal of century’ 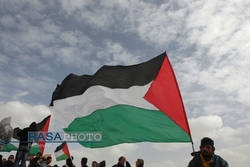 A group of former senior European politicians have signed a letter to the European Union that calls on the bloc to reject the so-called US peace plan for the Middle East if it is one-sided and unfair to Palestinians.

The letter comes as US President Donald Trump prepares to unveil his administration's plan – dubbed “the deal of the century” – on the Israeli-Palestinian conflict.

“It is time for Europe to stand by our principled parameters for peace in Israel-Palestine,” read the letter, calling for a solution that guarantees a separate and fully sovereign state of Palestine.

“We are convinced that a plan that reduces Palestinian statehood to an entity devoid of sovereignty, territorial contiguity and economic viability would severely compound the failure of previous peace-making efforts,” the former officials said.

They also criticized the Trump administration for its “disturbing indifference” to the expansion of illegal settlements, which are backed by Israel’s recently re-elected Prime Minister Benjamin Netanyahu.

“Unfortunately, the current US administration has departed from longstanding US policy,” the letter said, criticizing Trump’s 2017 recognition of “only one side’s claims to Jerusalem [al-Quds].”

The so-called deal, a backchannel plan to allegedly reach a peace settlement between Israel and the Palestinians, was proposed by the US administration in late 2017. Although the plan has not been released, leaks signal it will consist of the same tried and failed ideas.

Trump’s son-in-law and senior adviser Jared Kushner has made regional tours over the past two years to secretly win support for the plan.

The prospect of peace between Israelis and Palestinians was dealt a major blow in December 2017, when Trump recognized Jerusalem al-Quds as the “capital” of Israel.

He also moved the American embassy from Tel Aviv to the occupied city on May 14, 2018, in what appeared to be an intentional coincidence with the 70th anniversary of Nakba Day (Day of Catastrophe). The occasion marks the expulsion by Israel of Palestinians from their motherland.

In 1948, when Israel declared its existence, some 700,000 Palestinians were driven out of their homes and scattered across refugee camps in the occupied West Bank, the Gaza Strip and neighboring countries.

Angered by Trump’s contentious move, Palestinian President Mahmoud Abbas boycotted the US administration, saying Washington was no longer qualified to serve as the sole mediator in the decades-long conflict with Israel, and that an international mechanism needed to be devised to replace the US in the so-called peace process.

Abbas has already rejected the initiative, calling it “the slap of the century,” because it is said to be hugely in favor of the Israeli regime.

Palestinians want the resolution of the conflict with Tel Aviv based on the so-called two-state solution along the pre-1967 boundaries. However, the Israeli officials insist on maintaining the occupation of Palestinian territories.