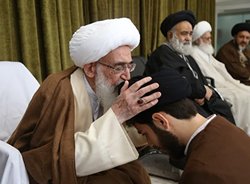 RNA – On April 3rd, the celebration of Eid al-Maba’th, the anniversary of the beginning of the ‎Prophet Muhammad’s prophetic mission, was held with the presence scholars, religious ‎personalities, ‎professors, students and staff of the Islamic Seminary of ‎Qom ‎and various ‎groups of laypeople in the houses and offices of the sources of emulation.‎

On the 27th of Rajab in the 40th Year of the Elephant, the Prophet Muhammad ‎was ordered ‎by God to declare his prophethood to the world. At that time, he ‎was forty years old.‎
‎ ‎
Celebrations of Eid al-Maba’th‎ were held at the home and offices of Ayatollahs Lotfollah Safi- ‎Golpaygani, Hoseyn Vahid-Khorasani, Naser Makarem-Shirazi, Hoseyn Nouri-Hamadani, Jafar ‎Sobhani, Seyyed Mousa Shobeyri-Zanjani and other sources of emulation‎ and scholars in the ‎holy city of Qom.‎

Also, the celebration of Eid al-Maba’th‎ was held in Qom in the presence of personalities, the ‎people of Qom the scholars at the Office of the Supreme Leader of the Islamic Revolution, ‎Ayatollah Sayyed Ali Khamenei.‎
‎ ‎
In these ceremonies, the speakers explained the philosophy of the mission of the Prophet ‎Muhammad and considered the most important lesson of his mission as confronting ‎ignorance and saving humankind from misguidance. They also emphasized the problems of ‎the Muslim world today. ‎

It was stated that if Muslims would follow the same path that was emphasized on by the ‎Prophet, they wouldn’t face many problems today.‎

On this auspicious day, a group of seminarians from the Islamic Seminary of Qom were ‎bestowed with the honour of wearing the blessed and honourable clothing and turban of the ‎clergy. ‎

Shi’ah clergy wear a white or black turban, a special ankle-length coat called a qaba, with an ‎aba, a loose, ‎sleeveless cloak, which open in front worn over the qaba. The black turban is ‎only worn by a cleric who is a ‎sayyid, someone descended from the Prophet Muhammad ‎‎(S). ‎

This uniform is considered an honour to wear by the clerics and is only given after several ‎years of ‎seminary studies. It comes with heavy responsibilities and it an honour which is not ‎taken lightly.‎

It’s worth mentioning that ceremonies marking Eid al-Maba’th were also held at the Holy ‎Shrine of Lady Fatimah al-Ma’sumah, ‎Jamkaran Mosque as well as at other holy sites, ‎mosques and other religious places ‎throughout Qom and Iran. ‎

In celebration, Iranians also set up “salawati” stations where they distribute ‎sweets and ‎sherbet to those passing by.