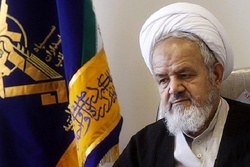 Rasa‏ ‏‎– The head of the Ideological and Political Office of the Commander-in-Chief said, “The ‎politicians of the world have acknowledged that Iran has been able to conquer the ‎‎Mediterranean coast by relying on Wilayat al-Faqih.”‎

RNA – Speaking during a rally in Qom marking the fortieth of Iran’s Islamic Revolution, Hujjat ‎al-Islam Ali Sa’idi, the head of the Ideological and Political Office of the Commander-in-Chief, ‎referred to the enemies’ conspiracies throughout forty years since the victory of the Islamic ‎Revolution and said, “The Supreme Leader of the Islamic Revolution [Ayatollah Khamenei] ‎said ‘the enemies, with all of their might, sought to instigate an uprising in 2018 but they ‎failed and it’s possible that they may try to instigate sedition in 2019.’ For this reason, Qom ‎is the centre of the exportation of the Revolution and today, it must be present on the scene ‎and protect and preserve the Islamic Revolution.”‎

His Eminence considered one of the elements of Iranian power as “regional power” and ‎stated, “Donald Trump planned to eliminate Iran’s spiritual and regional influence in Iraq, ‎Lebanon, Syria, Yemen, and other Islamic countries through a second and third JCPOA. ‎Today, the politicians of the world have acknowledged that Iran has been able to conquer ‎the Mediterranean coast by relying on Wilayat al-Faqih (Guardianship of the Jurisprudent).”‎

Hujjat al-Islam Sa’idi emphasized, “We had five goals in Syria, namely protecting Syria’s ‎independence, maintaining the Islamic Resistance Axis, protecting Bashar al-Asad, defending ‎the shrines of the Ahl al-Bayt, and repulsing the evil of Daesh who are the most evil ‎movement in history.”‎

He pointing out that the enemies are trying to achieve their evil objectives by relying on ‎internal factors, said, “Today, the enemies have come to a conclusion that through the soft ‎war and the launch of battles in the field of software they will overcome the ideology and the ‎culture of the Islamic Republic.”‎

In regard to this soft war, Hujjat al-Islam Sa’idi ‎ added that through opportunities for ‎deviation, the enemies seek to create disorder among the beliefs of the people and desire to ‎damage the religious beliefs and thoughts of the people, make them abandon the divine ‎leadership and reduce ‎the idea of the domination of monotheism throughout of the world to ‎the level of surface issues.”‎

‎“Undoubtedly, if the level of the aspirations of a revolutionary nation is degraded, then their ‎revolution will not be sustainable,” he added.‎

Tags: Ali Saidi JCPOA Trump Islamic Revolution Iran
Short Link rasanews.ir/201rME
Share
0
Please type in your comments in English.
The comments that contain insults or libel to individuals, ethnicities, or contradictions with the laws of the country and religious teachings will not be disclosed