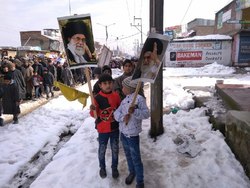 RNA – In an exclusive interview with Ovain Ali, a revolutionary student in Indian-occupied ‎Kashmir, said, “On the occasion of the fortieth anniversary of Iran’s Islamic Revolution, a ‎great rally was held in Sringar, Indian-occupied Kashmir, with thousands of people ‎participating from various parts of the Kashmir Valley. Despite the severe cold, the people ‎raised banners and placards containing revolutionary slogans.”‎

He said, “During this rally, slogans were shouted against the United States, Israel and Saudi ‎Arabia. In the rally, thousands of people expressed great courage and faith in the Islamic ‎Revolution.”‎

Ali added that many religious scholars and social activists spoke at the rally and described ‎the various aspects of the Islamic Revolution and the role of Imam Khomeyni and ‎condemned the brutal killing of Zakariya Badr al-Jabir, a six-year-old boy in Madinah, a Saudi ‎taxi driver.‎

He said, “The speakers at the rally said that Iran’s Islamic Revolution is an asset for the ‎entire Islamic ummah.”‎

Tags: Kashmir Islamic Revolution Iran India Ovain Ali Zakariya
Short Link rasanews.ir/201rMD
Share
0
Please type in your comments in English.
The comments that contain insults or libel to individuals, ethnicities, or contradictions with the laws of the country and religious teachings will not be disclosed