‘Deprived’ northern England hit most by years of UK austerity 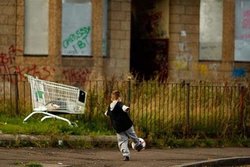 A new study shows that the traditionally poorer regions north of England are the most affected by years of austerity programs under the Conservative-led government ruling the United Kingdom.

RNA - Results of the study by The Center for Cities showed that government spending cuts that have been in place since 2010 had left people in the “deprived” northern regions of England worst off.

The thinktank said areas such as Liverpool, Blackburn and Barnsley have suffered twice the level of cuts imposed on local councils than people in the affluent southern regions of England. It said the average national spending in the entire UK had halved over the past years but the northern regions have borne the brunt.

The study, covered in the Guardian newspaper, said people in cities in the North have been affected more than people in rural areas and countryside, adding that austerity has impacted services like street cleaning, road repairs and libraries more than other fields.

The revelations come amid numerous reports and studies suggesting that government austerity measures, which began two years after the 2008 financial recession, has badly affected UK’s social life and widened the gap between the poor and the wealthy.

The United Nations said after a lengthy investigation late last year that the austerity had left a fifth of UK population, around 14 million people, in poverty.

Life for the poor has become even more complicated in light of changes to government social care policy.

Official surveys have found that many people have become homeless as a result of the cancellation of their social benefits under Universal Credit, a signature government scheme which seeks to replace old benefits with a lump sum monthly payment while aiming to reduce the number of people eligible for government support.

Tags: England UK austerity
Short Link rasanews.ir/201rIn
Share
0
Please type in your comments in English.
The comments that contain insults or libel to individuals, ethnicities, or contradictions with the laws of the country and religious teachings will not be disclosed