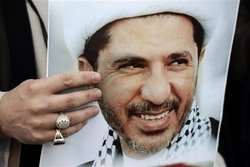 A decision by Bahrain's highest court to uphold life sentence for prominent Shia cleric and opposition leader Sheikh Ali Salman is “political,” says an activist, adding that there is no independent judiciary in the tiny Persian Gulf kingdom.

RNA - “It is of course a political decision not a judiciary one. There is no judiciary in Bahrain, there is no independent judiciary, it is part of the regime. The head of the judiciary and the rest of senior figures belong to the ruling family, so there is no separation of powers in Bahrain. Now for this court to uphold the earlier decision to jail Sheikh Ali Salman for life is just a continuation of the same old policy of ensuring that everyone of significance, everyone who can have a decision is behind bars … so this is an earlier decision that had been taken by the regime, not based on facts,” Saeed Shahabi, with the Bahrain Freedom Movement, told Press TV in an interview.

The verdicts are final and cannot be appealed.

On November 1, 2017, Sheikh Salman and his two assistants were charged with “spying on behalf of a foreign country... with the aim of carrying out subversive acts against Bahrain and harming its national interests.”

Sheikh Salman was also charged with “revealing defense secrets to a foreign country and disseminating information that would harm Bahrain's status and reputation.”

The senior Shia Bahraini cleric has been in jail on a nine-year prison sentence since late 2014 for what the Manama regime has described as “insulting” government officials, “inciting” unrest through his speeches targeting the authorities during the 2011 uprising, attempting to overthrow the regime and collaborating with foreign powers.

Sheikh Salman denies all the charges, saying he has merely been seeking reforms in the country through peaceful means.

Tags: sheikh Ali salman Bahrain Shia Cleric
Short Link rasanews.ir/201rIh
Share
0
Please type in your comments in English.
The comments that contain insults or libel to individuals, ethnicities, or contradictions with the laws of the country and religious teachings will not be disclosed