One Palestinian Killed, Others Injured in Settlers’ Attack in Ramallah 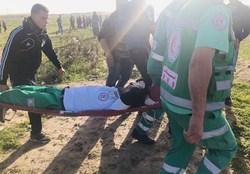 The Palestinian Red Crescent stated that one Palestinian citizen was killed and over 20 others suffered bullet injuries on Saturday after a horde of armed Jewish settlers stormed al-Mughayyir village, Northeast of Ramallah in the West Bank.

RNA - Ambulance crews from the Red Crescent evacuated many wounded citizens to hospitals in Ramallah and al-Bireh, Palinfo reported.

The martyr is Hamdi Na’san, 38, and suffered a serious bullet injury in his back. Others was also badly wounded by Israeli gunfire, according to the health ministry.

The events started when a gang of armed settlers stormed the village to assault its residents and embarked on opening fire at local young men who were defending their homes and trying to fend off the assailants.

According to local sources, the settlers and soldiers who came later to back them intensively opened fire at homes and local residents.

Tags: Israel Palestinian Ramallah
Short Link rasanews.ir/201rI4
Share
0
Please type in your comments in English.
The comments that contain insults or libel to individuals, ethnicities, or contradictions with the laws of the country and religious teachings will not be disclosed