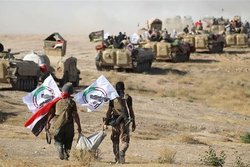 Iraq's pro-government Popular Mobilization Units, known in Arabic as Hashd al-Sha’abi, have advised Israel against “playing with fire” after US Secretary of State Mike Pompeo hinted that Tel Aviv may attack the anti-terror volunteer fighters.

RNA - Moein al-Kazemi, a Hashd commander, told the Iraqi Kurdistan's Rudaw television network on Sunday that the force was ready to deliver a “strong” response to any aggression.

He said while Israel had yet to make a move, Israeli media were already testing the Iraqi government’s reaction to a possible attack by publishing bogus reports on the issue.

Nonetheless, any act of hostility against Hashd al-Sha'abi could backfire on Tel Aviv as thousands of missiles in southern Lebanon were already aimed at Israeli targets, al-Kazemi warned.

The commander made it clear that Hashd al-Sha’abi was an official military organization funded in part by the Iraqi government and therefore “had the right” to defend the country.

Pompeo, who paid a visit to Baghdad and Iraq’s Kurdistan region earlier this month, was reported to have made it clear to Iraqi officials that Washington would not react to possible Israeli attacks against Hashd fighters.

Citing an unnamed Iraqi official, Russia’s RT Arabic service reported Thursday that the top US diplomat had relayed the message during a meeting with Iraqi Prime Minister Adel Abdul-Mahdi.

Abdul-Mahdi expressed concern about the statement and warned Pompeo that such actions by Israel would have grave consequences, the report said.

Last June, Hashd fighters came under attack in Syria’s border town of al-Hari, in the eastern province of Dayr al-Zawr, as they were chasing Daesh terrorists out of the area.

Both the Syrian government and Hashd al-Sha’abi declared back then that the attack near the Iraqi-Syrian border had been deliberate and could only have been carried out by either Israel or the US.

An unnamed US official denied any involvement by American forces, triggering speculation by some media sections that Israel might have been behind the attack.

“We have reasons to believe that it was an Israeli strike,” the official told Agence France-Presse (AFP) at the time.

The Iraqi Foreign Ministry also denounced the airstrike, saying it “expresses rejection and condemnation of any air operations targeting forces in areas where they are fighting Daesh, whether in Iraq or Syria or any other area where there is a battlefield against this enemy that threatens humanity.”

Israel has repeatedly launched airstrikes against Syrian military forces and other groups fighting Daesh in the Arab country, under the pretext of attacking Iranian military advisers in Syria.

Many observers believe the attacks are aimed at propping up the Takfiri terror groups which are on their last legs in the face of constant Syrian army advances.

Hashd al-Sha'abi and other anti-terror Iraqi fighters are cooperating with the Syrian government to keep the two countries' joint border safe and repel terrorists.

Tags: Hashd Iraq Israel
Short Link rasanews.ir/201rGu
Share
0
Please type in your comments in English.
The comments that contain insults or libel to individuals, ethnicities, or contradictions with the laws of the country and religious teachings will not be disclosed