US ‘deal of century’ doomed to hit dead end 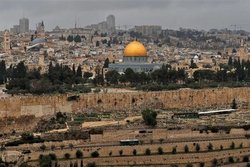 The Palestinian Authority (PA) says US President Donald Trump’s yet-to-be-unveiled proposal on the Israeli-Palestinian conflict will hit a “dead end” after an Israeli TV report released what it called details of the so-called “deal of the century.”

RNA - PA spokesman Nabil Abu Rudeineh stressed on Wednesday that any imitative short of a sovereign Palestinian state based on the pre-1967 boundaries with the entire East Jerusalem al Quds as its capital would fail.

“Rumors and leaks about the deal of the century, as well as ongoing attempts to find regional and international parties that would cooperate with this plan, are failed attempts that will reach a dead end,” he said.

“Any peace plan that does not include an independent Palestinian state - with all of East Jerusalem as its capital - on the 1967 borders, is destined to fail,” he added.

Citing a source who took part in a briefing in Washington on the so-called peace plan by a senior American official, Israeli Channel 13 TV reported that the bid provides for a Palestinian state in 85-90 percent of the West Bank, with the capital in “most of the Arab neighborhoods” of East Jerusalem al-Quds.

The plan also endorses the Israeli grip over parts of East Jerusalem al-Quds and the Holy Basin, which includes the Old City and its adjacent territories, according to the report.

However, the Israeli settlements, defined as isolated, would not be evacuated and expanded, but “dried out.”

Most importantly, this is a plan that doesn't solve anything: Keeping #AlQuds & #AlAqsa under #Israel|i occupation only means the conflict shall continue, & w/ more intensity—b/c the plan attempts to legitimize the Israeli occupation of E. Jerusalem & its holy sites. | #Palestine

The White House rejected the Channel 13 report as mere “speculations.”

“As in the past, speculations regarding the peace plan are inaccurate. We have no further reaction,” it said in a statement.

The so-called U.S. ‘Peace Plan’ is exactly what we feared it is #Palestinians would be fools to say “Yes” if Implemented it would establish a Non-Contiguous “State” of #Palestine on 85-90% of West Bank no Capital in East Jerusalem Annexation of the Major Settlement Blocs 1/
— Eric Gandara (@Gandi2099) January 17, 2019

Elsewhere in his remarks, Abu Rudeineh said that any proposal meant to resolve the Israeli-Palestinian conflict should have "international legitimacy."

“The address for achieving a just and lasting peace is the Palestinian leadership, which affirms that any proposals regarding the political process must be based on international legitimacy and the principle of the two-state solution,” he said.

Palestinians have already rejected Trump’s plan, with President Mahmoud Abbas calling it “the slap of the century.”

Last month, eight European Union member states warned that Trump’s initiative would not be successful if it fails to take into account internationally-agreed parameters for peace.

The United Kingdom, France, the Netherlands, Poland and Sweden – which are all member states to the UN Security Council - as well as Belgium, Germany and Italy said in a joint statement that the so-called Middle East peace plan should support the Palestinian statehood and end the Israeli occupation.

Israel occupied the West Bank as well as East Jerusalem al-Quds during the Six-Day War in 1967. It later annexed the Palestinian city in a move not recognized by the international community.

Israel lays claim to the whole city, but the Palestinians view its eastern sector as the capital of their future sovereign state.

Trump recognized Jerusalem al-Quds as the Israeli “capital” in December 2017 and moved the American embassy from Tel Aviv to the ancient city in May 2018, sparking global condemnations.

Tags: Quds Jerusalem US Palestine
Short Link rasanews.ir/201rG0
Share
0
Please type in your comments in English.
The comments that contain insults or libel to individuals, ethnicities, or contradictions with the laws of the country and religious teachings will not be disclosed