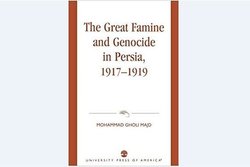 The deadly famine in Iran, which was caused by the British presence in the country during World War I, is ignored by almost all recent history books.

RNA - Dr. Mohammad Gholi Majd’s “The Great Famine and Genocide in Persia 1917-1919” is perhaps the only book that extensively documents the genocide.

According to the book, the widespread famine coupled with a disease epidemic killed around 8-10 million Iranian between 1917 and 1919, nearly half of the country’s population back then.

Majd, who has a PhD in Agricultural Economics from Cornell University, writes in his book that after invading Iran at the beginning of 1916, the British used all means of transportation for war supplies to the front-lines.

That effectively prevented imports of wheat and other foodstuff into Iran from India, Mesopotamia, Asia, and also the United States -- which was back then a rival of the UK.

Majd argues that Brits even kept ships loaded with wheat from entering the southern port of Bushehr in the Persian Gulf.

He also writes that significant amounts of food were confiscated by the British to supply British troops both within Persia and in the region.

Further aggravating the situation was the refusal of the Allies of WWI – France, the UK and Russia –to pay Iran for using its oil reserves during the war, the book says.

Majd argues in his book that the UK intentionally caused the genocide conditions to weaken Iran and effectively take control of the country out of fear for its interest in India, which was then a component of the British Empire.

"According to the American Charge d'Affaires, Wallace Smith Murray, this famine had claimed one-third of Iran's population. A famine that even according to British sources as General Dunsterville, Major Donohoe, and General Sykes had claimed vast numbers of Iranians," reads the book.

Major Donohoe describes Iran of that time as a “land of desolation and death.”

As it has been the case with many other crimes committed by the British Empire, London has long tried to cover up London’s role in the deadly famine.

Historic documents released by the British government over the past decades overlook the genocide. The UK Foreign Office did not even mention the famine in its 1919 “Handbook on Iran.”

Tags: Britain Iran famine WWI
Short Link rasanews.ir/201rFy
Share
0
Please type in your comments in English.
The comments that contain insults or libel to individuals, ethnicities, or contradictions with the laws of the country and religious teachings will not be disclosed