Israel’s Not So Secret Program to Arm Terrorists in Syria 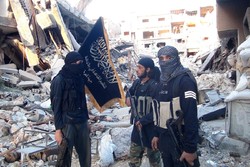 The whole world is in the know how that the Israeli army has been, from day one, and still is providing large amounts of cash, weapons and ammunition to foreign-sponsored Salafi-Takfiri terrorists operating in Syria.

RNA - Even the Israeli army chief admits. Chief of Staff Gadi Eisenkot has just confirmed that the Israeli military indeed has provided and continues to provide weapons to various terrorist groups operating in Syria. This is not the first official confirmation from the army chief. Back in September Israeli media also reported that Israel has armed as many as 12 terror factions. Those reports were quickly censored by the Israeli military, however. But there have long been reports of Isael's backing for the terrorists in Syria. This includes supplying arms, training, medical treatment, intelligence sharing and aerial backup. Photos of Israeli premier Benjamin Netanyahu visiting Al-Nusra terrorists under treatment in Israeli field hospitals surfaced the media some 4 years ago.

Mind you, the terror outfits have been confirming such support for a while as well, saying they are given large amounts of money and aid as well. Even Syria has confirmed capturing arms and munitions with Hebrew writing on them held by the terrorists and Qaeda-allied rebels. By late 2018, however, Syria made major gains in this part of the country, ultimately forcing the Israeli-backed terrorists to surrender, with some negotiating relocation to Idlib.

Then again, that does in no way mean that this not so secret Israeli program to aid and abet terrorist groups inside Syria is now behind us. Quite the opposite, the Zionist regime continues to arm its terror proxies on the pretext of “self-defense”. This is likely an attempt to justify the legality of this criminal partnership in the failed regime-change war, in which Israel has long claimed neutrality. In reality, Israel’s claims of neutrality are only superficial, with the regime officials having repeatedly expressed a preference that ISIL and other Qaeda-allied terror groups impose regime change rather than the Syrian government surviving.

For that to happen, Israel has also opened its borders with Syria in order to provide medical treatment to the Nusra Front and Al-Qaeda militants wounded in the ongoing war. These terror groups are still receiving medical treatment and still fighting the Syrian government, and have never bothered Israel since the collective regime-change campaign began several years ago with a helping hand from the United States and its regional allies.

After all, Israel never views Al-Qaeda and its allies as enemies – just like the US and Saudi Arabia. Mind you, this policy hasn’t caused any tension with the United States or its regional allies either, because they also refuse to fight Al-Qaeda and Nusra Front fighters in Syria. They are also there to affect regime change.

According to Fars News Agancy, this should surprise no one. Despite Trump’s rhetoric of troop withdrawal, white House officials say American occupying forces will stay in Syria. And Amos Yadlin, the former military intelligence chief, once said Hezbollah and Iran "are the major threat to Israel, and that those terrorist elements who control some of the border on the Golan aren't attacking Israel. This gives you some basis to think that they understand who is their real enemy - it isn’t Israel”.

It all says why the Israel-Syria border area along the occupied Golan Heights has remained largely quiet, why Israel still pounds Syrian Army positions in the seven-year conflict, and why it is safe to conclude that ISIL and Qaeda-allied terrorist groups are indeed backed by Israel AND the United States, which is Israel’s main ally in the region.

Sadly, the United Nations is yet to take any legal measures to stop this never-ending madness. The failure of the UN system and, separately, of the International Criminal Court to hold to account Israel, the United States, and their regional allies and terror proxies or prosecute their war crimes and crimes against humanity has also done lasting harm. This is all about the inaction of the Security Council amid all the reports published and official acknowledgements by the American and Israeli officials.

The human cost aside, the military intervention in Syria by Iran and Russia at the Syrian government’s request has been a strategic success for the people of Syria and a defeat for all terrorist groups and their American-Israeli-Saudi sponsors. This has ultimately assured a long-term regional peace and security, a lasting victory over various terror groups, and has re-established Syria as an influential Middle East player despite the reconstruction challenges ahead.

Tags: Israel Syria UN terrorist ISIL
Short Link rasanews.ir/201rFl
Share
0
Please type in your comments in English.
The comments that contain insults or libel to individuals, ethnicities, or contradictions with the laws of the country and religious teachings will not be disclosed