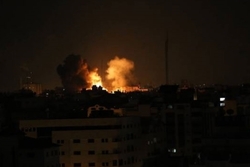 The Hamas Movement condemned Israel’s persistence in cold-bloodedly killing peaceful protesters and bombing resistance posts in the Gaza Strip as “a dangerous escalation and playing with fire".

RNA - In a press release, Hamas Spokesman Fawzi Barhoum warned that Israel’s escalation against Gaza would bring no security to its citizens, holding it fully responsible for the consequences of its foolish acts, Palinfo reported.

Barhoum affirmed that the Palestinian resistance factions understand the nature and mindset of the criminal Israeli entity and are able to break its equations and protect their own people.

Israeli warplanes bombed several targets in Gaza, with no reported casualties. On Friday, Israeli soldiers opened fire at Palestinian demonstrators participating in the weekly March of Return rallies on the Eastern border of Gaza, killing one woman and injuring others.

Tags: Israel Gaza Hamas
Short Link rasanews.ir/201rFV
Share
0
Please type in your comments in English.
The comments that contain insults or libel to individuals, ethnicities, or contradictions with the laws of the country and religious teachings will not be disclosed