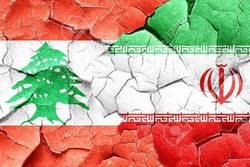 RNA - Arslan said that in the absence of Iran in Lebanese resistance movement with terrorists and Takfiri groups and the ISIL and the Zionist regime, terrorists would have captured the entire region including Lebanon.

Arslan, who also serves as acting Lebanese Minister for the Displaced People, made the remarks in a meeting on Saturday.

Grounds are now well-prepared for countries who mind to follow Iran along with Syria and Lebanese resistance to help restore stability and nations' rights in this region.

“Road Map and our essential plan in the region require collective support of resistance movement which is regarded as invincible principles,” he said.

In the meeting, the Iranian ambassador voiced Iran's readiness to expand relations and cooperation between the two countries.

“Such interactions between the two sides will play decisive role in fight against threats imposed by Zionist regime and existing challenges in the region,” he said.

Lebanese political and religious spectra have close ties with Iran.

In a related front, earlier on December 21, Firouznia and President of the Progressive Socialist Party of Lebanon Walid Jumblatt exchanged views on important developments in the Arab country.

Since being appointed as Iran's ambassador in Beirut a few months ago, Firouznia has held meetings with several Lebanese political and religious figures.

A day before his meeting with Jumblatt, Firouznia, in a meeting with a delegation comprising representatives of certain Lebanese parties, political forces and national figures, said that political progression in Lebanon helps establishment of peace and security in the country, giving leverage to the Arab country to play a bolder role in regional developments.

There he reiterated that Iran supports formation of new Lebanese government.

“Tehran supports formation of the new Lebanese government and progressing political movement in the country, especially after recent parliamentary elections,” he said.

He added that formation of the government and progressive political movement in Lebanon will boost security and stability of the country, making it for the country possible to have a greater role in regional and international scenes.

The official also stressed expansion of Tehran-Beirut cooperation and relations.

On Palestine developments, the envoy said the Palestinian nation's resistance against the occupying Zionist regime has caused mental tranquility in the world of Islam, leading to failure of the US plans and the compromise plan in Lebanon.

Earlier on December 17, Firouznia met with a host of Sunni figures of Lebanon, and stressed the need for unity among Muslims to strengthen the resistance front in the region.

During the meeting held in Iran’s Embassy in Beirut, both sides discussed regional developments.

They stressed unity as the pivot of resistance movement, saying that the movement has gained resolute victories and withstood Takfiri terrorism with strength.

The attendees also underscored role of resistance groups in standing against the Zionist regime and their allies, saying that Iran’s resistance and stability in the region have created wider prospects for resistance groups.

Earlier on November 28, Advisor to the Iranian Parliament Speaker Hossein Amir Abdollahian underlined that his country attaches great importance to the security of Lebanon as the forefront of war against Israel.

Iran attaches importance to relations with Lebanon and Iran assumes Lebanon's security and stability its own security, he added.

According to Fars News Agancy, Amir Abdollahian stressed that Lebanon is the forefront of the war against the Zionist regime and Takfiri terrorists.

Mansour, for his part, lauded Iran's constructive role in the region, saying Iran had an important role in restoring peace and stability to Iraq and Syria.

In relevant remarks in May, Iranian President Hassan Rouhani stressed his country's continued support for Lebanon against terrorism and Israeli aggression, expressing the hope that the recent elections would further strengthen the Tehran-Beirut ties.

"The Islamic Republic of Iran will continue its supports for the Lebanese government and nation to resist against the terrorist groups and the aggressive measures by the Zionist regime," President Rouhani said in a meeting with new Lebanese Ambassador to Tehran Hassan Abbas.

Tags: Lebanon Iran Terrorism
Short Link rasanews.ir/201rF6
Share
0
Please type in your comments in English.
The comments that contain insults or libel to individuals, ethnicities, or contradictions with the laws of the country and religious teachings will not be disclosed