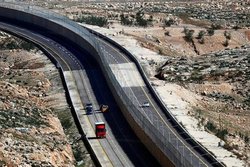 After constructing the controversial "apartheid wall" to separate Jerusalem al-Quds from the rest of the West Bank, Israel has now opened the “apartheid road” in the area, separating Palestinian and Israeli drivers with a wall.

RNA - The roughly 3.5km stretch, which was inaugurated on Wednesday, features an eight-meter high wall that puts Palestinian drivers, who are banned from entering the city, on the western side and Israeli settlers on the eastern side.

The road was constructed over a decade ago but remained closed amid a dispute between the Israeli military and police over a checkpoint.

While segregated Israeli roads are common, none had featured a wall before.

“This is an Israeli example of apartheid and racist separation that once existed in South Africa,” PLO Executive Committee member Ahmad Majdalani told Israeli media. “Any Israeli who believes in democracy should feel ashamed about this new road.”

According to Press TV, the Palestinian Authority said in a statement that the road posed a challenge to “the credibility of the international community."

"It's a shame on the international community to see an apartheid regime being established and deepened without doing anything to stop it," the PA statement read.

Palestinians have long feared that the road and other similar construction projects in the area would eventually split the West Bank in half, further hindering Palestinian plans for a future state.

A two-lane road built on a stolen land opens in occupied Jerusalem.
The road is divided by a high wall, better called Apartheid wall, in which the western side serves Palestinians and the eastern one serves illegal Israeli settlers.
WELCOME TO APARTHEID israel! #Palestinepic.twitter.com/b4ESSjYF4V

According to Aviv Tatarsky, who works with the NGO, the new road further isolates some Palestinian villages from Jerusalem al-Quds while forcing Palestinians traveling between the north and south of the West Bank to change course.

If this isn’t apartheid what is? #Palestinians are forced to stay on one side of this road outside of #Jerusalem and Jewish settlers use the other. pic.twitter.com/cYOgrKENWw

Jerusalem al-Quds is already separated from the West Bank by the so-called Israeli “apartheid wall.”

The International Court of Justice said in 2004 that the apartheid wall violated international law and urged Israel to remove it.

Tags: Israel Quds West Bank
Short Link rasanews.ir/201rEZ
Share
0
Please type in your comments in English.
The comments that contain insults or libel to individuals, ethnicities, or contradictions with the laws of the country and religious teachings will not be disclosed