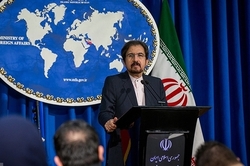 The Iranian Foreign Ministry has condemned a decision by the European Union to place two Iranian individuals and a department of the Iranian Intelligence Ministry on its “terror” list over what it calls links to “foiled attacks” in Europe.

RNA - In a press release on Wednesday, Foreign Ministry Spokesman Bahram Qassemi called the EU’s decision to blacklist the two Iranians and the Directorate for Internal Security at the Iranian Intelligence Ministry “irrational” and “odd” and said the move showed the European countries’ “dishonesty” in fighting terror.

“Instead of blacklisting such terrorist and criminal groups as the Monafeqin (MKO) and al-Ahwaziya, the European Union has allowed them freedom to carry out their inhuman and terrorist activities and even provides them protection, while it levels accusations against Iran, which is the flag-bearer in the fight against terror in the region and to which Europe owes its security,” Qassemi said.

He said Iran will take reciprocal measures in response, without elaborating.

Earlier in the day, an EU press release said sanctions, which include the freezing of funds and other financial assets, will be effective against those targeted as of Wednesday.

“These listings have been adopted by the Council as part of its response to recent foiled attacks on the European soil,” it added.

This is the first time the EU has imposed sanctions on Iran since lifting an array of embargoes following Iran’s 2015 nuclear deal with world powers.

The US and Israel were quick to welcome the anti-Iran move.

“The US strongly supports the new sanctions and stands with our European allies as we counter this common threat,” US Secretary of State Mike Pompeo tweeted.

The Israeli Foreign Ministry also said in a tweet, “This is an important first step by the EU, combating Iranian aggression. The newly imposed sanctions offer some hope that a growing number of countries are willing to take an active, clear stand against Iran’s global campaign of terrorism.”

The European Union’s decision was first announced by Denmark on Tuesday.

Also on Tuesday, the Netherlands' government accused Tehran of hatching plots and involvement in two killings in 2015 and 2017, sending a letter, signed by the foreign and interior ministers, to the Dutch parliament to warn of further economic embargoes if Tehran did not cooperate with European probes.

The provocative move follows last year’s statements by Denmark and France that they suspected a so-called Iranian government intelligence unit pursued killing plots on their territories.

Copenhagen at the time sought an EU-wide response.

Tehran has strongly denied any involvement in the purported plots, saying the accusations were merely intended to damage EU-Iran relations amid efforts to save the 2015 deal following Washington's withdrawal.

According to Press TV, Iran also stresses that it is a victim of terrorism, particularly inflicted by the anti-Iran terror outfit Mujahedin-e-Khalq Organization (MKO), whose members live freely in EU countries.

The EU’s latest move prompted a strong reaction from Iranian Foreign Minister Mohammad Javad Zarif, who said on Twitter that the sanctions would “not absolve Europe of responsibility for harboring terrorists.”

The MKO has carried out numerous attacks against Iranian civilians and government officials over the past three decades and is listed as a terrorist organization by much of the international community.

Out of the nearly 17,000 Iranians killed in terrorist assaults since the victory of Iran’s 1979 Islamic Revolution, about 12,000 have fallen victim to MKO’s acts of terror.

Tags: EU Iran MKO Terrorist
Short Link rasanews.ir/201rE3
Share
0
Please type in your comments in English.
The comments that contain insults or libel to individuals, ethnicities, or contradictions with the laws of the country and religious teachings will not be disclosed