It’s shame that Trump puts up with his insubordinate staff 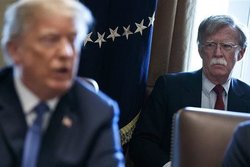 Former US Congressman and political analyst Ron Paul says President Donald Trump’s staff is “insubordinate,” and it’s “shame that he puts up with this.”

RNA - Dr. Paul, a three-time American presidential candidate and the founder of the Ron Paul Institute for Peace and Prosperity, made the remarks in an interview while commenting some Trump administration officials’ statement regarding the president’s plans of troop withdrawal from Syria.

Trump’s national security adviser John Bolton on Sunday set conditions for a troop departure that could take months, contradicting the president’s insistence that the withdrawal would be immediate and without any conditions.

Speaking during a visit to Israel, Bolton said that the United States must achieve certain “objectives” before withdrawing troops from Syria, a country where the US, Israel, France, Britain and their regional allies such as Saudi Arabia, the United Arab Emirates, Turkey and Qatar have been sponsoring terrorists since 2011. This has left the country in ruins.

“The timetable flows from the policy decisions that we need to implement,” Bolton said.

On Monday, Trump rebuffed Bolton and stated that his plans to withdraw US troops from Syria are “no different” than originally announced.

“No different from my original statements, we will be leaving at a proper pace while at the same time continuing to fight ISIS (Daesh) and doing all else that is prudent and necessary!” he wrote.

Commenting on this, Dr. Paul said, “Here we have a mess over there. We are in a mess….Our policy now is designed maybe slightly less than a few months ago anti-Assad. But now that [Syrian President Bashar] Assad and Russians actually won you know, so we have to drop that issue.”

Why animosity against Iran

“There is no doubt that the animosity -- including Trump – is very strong against Iran. I mean that is a big deal. That goes along with the wild enthusiasm we have for Israel you know because that’s their archenemy along with Saudi Arabia,” he added.

The veteran commentator said that “it’s shame” that Trump puts up with his “insubordinate” staff.

“His staff has undermined him. And now he is in limbo,” he stated.

“The effort in the Senate has turned into a big deal, because the Senate bill No. 1 which is considered the biggest bill of the whole year, and No. 1 is Rebuke the President because he stopped the war or wanted to stop the war. And that’s how strongly they feel about it,” Dr. Paul pointed out.

“You know who is behind it? [Marco] Rubio, you know [Lindsey] Graham, and [Tom] Cotton, and unfortunately who I thought more neutral because he is the ‘leader’ of the Senate McConnell, who is the original co-sponsor of it. That’s how powerful it is. Guess what they will probably even get that bad new senator, that Mitt Romney,” he noted.