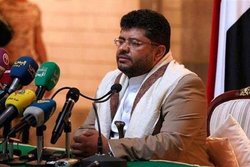 A high-ranking Yemeni official says delegates from the Houthi Ansarullah movement agreed to sit at the negotiating table with representatives loyal to former Yemeni president Abd Rabbuh Mansur Hadi during the latest round of UN-sponsored peace negotiations in Sweden, and struck a peace deal only because of the deteriorating humanitarian situation in the crisis-hit Arab country.

RNA - Speaking in an exclusive interview with Press TV television news network on Tuesday, Mohammed Ali al-Houthi, the Chairman of the Supreme Revolutionary Committee of Yemen, said despite some violations by Saudi Arabia and its allies, the peace deal continues to stand feebly.

He, however, underlined that Yemeni army forces and allied fighters from Popular Committees are fully prepared to respond to any act of aggression committed by Saudi Arabia.

Houthi then stressed the need for a political solution to the ongoing Yemen conflict, and an end to the atrocious Saudi-led bombardment campaign on the country.

He concluded that Saudi Arabia has failed to attain its goals in the war on Yemen, and that the oil-rich conservative kingdom will never reach them.

Ansarullah delegates and Hadi loyalists held a round of peace negotiations in Rimbo, north of the Swedish capital city of Stockholm, last month. The talks resulted in the announcement of a break-through agreement.

The document includes three provisions: a ceasefire along the Hudaydah front and the redeployment of armed forces out of the city and its port; an agreement on prisoner exchange; and a statement of understanding on the southern Yemeni city of Ta’izz.

Meanwhile, the spokesman for Yemeni Armed Forces says the Saudi-led military coalition has on nearly 2,000 occasions breached a UN-brokered truce in the strategic port city of Hudaydah ever since it was declared late last year.

During a press conference in the capital city of Sana’a on Tuesday, Brigadier General Yahya Saree presented a video, showing the flagrant violations of the Saudi-led military alliance in Hudaydah, including shelling a number of residential neighborhoods and construction of roads around the city.

Saree then showed an aerial image of a military camp, where Emirati troopers had purportedly installed missile launch pads to target various areas across Hudaydah as well as Kilo 16 and al-Durayhimi districts.

The top Yemeni military official highlighted that the Saudi-led military coalition carried out 162 airstrikes on different Yemeni regions, 183 ground offensives and 12 attempted acts of infiltration in the first week of January.

Saudi Arabia and a number of its regional allies launched a devastating military campaign against Yemen in March 2015, with the aim of bringing Hadi’s government back to power and crushing the country’s Houthi Ansarullah movement.

Tags: Houthi Ansarullah UN humanitarian crisis
Short Link rasanews.ir/201rDi
Share
0
Please type in your comments in English.
The comments that contain insults or libel to individuals, ethnicities, or contradictions with the laws of the country and religious teachings will not be disclosed