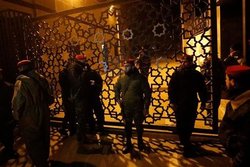 The Egyptian government has decided to close the Rafah crossing under Israeli pressure, because the Tel Aviv regime fears that the border will be controlled by Hamas, says a commentator.

RNA - Employees of the Palestinian Islamic resistance movement Hamas have retaken control of the crossing between the besieged Gaza Strip and Egypt after the Palestinian Authority withdrew its own staffers from the important gateway.

Israel has imposed movement restrictions on Gaza since the early 1990s. Restrictions intensified in June 2007, when Tel Aviv imposed a land, sea and air blockade on Gaza, citing security concerns.

Syed Mohsin Abbas, journalist and political commentator, told Press TV that Israel has called on Egypt to shut down the border crossing, because Israeli officials are nervous about the Palestinian resistance, which is growing up in the Gaza Strip.

“There is a general atmosphere of fear. This smells of weakness on the part of the Israelis in general” and they are “trying to break the Palestinian resistance” through imposing more restrictions on the Palestinians, Abbas said.

Tags: Rafah Israel Palestinian Islamic resistance movement Hamas
Short Link rasanews.ir/201rDg
Share
0
Please type in your comments in English.
The comments that contain insults or libel to individuals, ethnicities, or contradictions with the laws of the country and religious teachings will not be disclosed