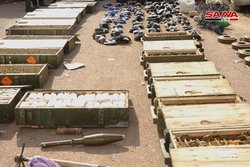 Syrian government forces have discovered Israeli and US-made weapons and munitions from former positions of foreign-sponsored Takfiri militants in the country's southwestern province of Dara'a.

RNA - An informed source, speaking on condition of anonymity, told Syria’s official news agency SANA that security forces had carried out clean-up operations in the villages of Umm al-Mayazin and Saida on Saturday, and found big weapons depots left behind by Takfiri terrorists.

Several telecommunication devices were recovered from the militant redoubts as well.

Scores of Takfiri militants were killed or injured in the process.

Tags: weapon Israel US Syria
Short Link rasanews.ir/201rCn
Share
0
Please type in your comments in English.
The comments that contain insults or libel to individuals, ethnicities, or contradictions with the laws of the country and religious teachings will not be disclosed