Official Condemns US’ Role in 2009 Riots 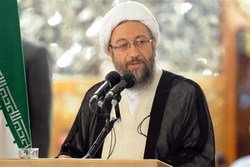 Iranian Judiciary Chief Ayatollah Sadeq Amoli Larijani said millions of insightful Iranians foiled the plots of the US and some other countries who instigated unrests in Iran in 2009, and condemned American conspiracies of then and now.

RNA - Ayatollah Amoli Larijani condemned the US administration’s support for rioters during the months of unrest in Iran after the presidential election results were announced in 2009.

He made the remarks on the anniversary of the massive pro-government rallies that put an end to the post-election unrests in 2009.

Ayatollah Larijani said that while at first the US administration of Obama was pretending to be eager to negotiate with Iran, they changed their approach when the protests broke out in Iran following the announcement of presidential election results, and the Americans along with France and some other western countries declared their support for the rioters.

The Judiciary chief added “they used to consider the rioters to be the only representatives of Iranian nation, while they ignored millions of insightful Iranians who poured into the street on the day of the massive pro-government rallies that put an end to the post-election unrests in 2009”.

He added that the enemies are using more sophisticated tools to instigate riots in Iran once again, calling on the Iranian officials to hear the voice of workers and students in particular to neutralize the conspiracies.

He also called on all Iranian nation to unite under the wise leadership of Leader of the Islamic Republic Ayatollah Khamenei in the face of threats.

On December 30, 2009, pro-government rallies were staged by millions of Iranians after a group of opposition supporters - including those who took part in the post-election unrests in June - took advantage of the highly revered religious day of Ashoura on December 27 - the anniversary of the martyrdom of Imam Hossein (AS), the grandson of Prophet Mohammad (PBUH) and Shiite Muslims' third Imam - to chant slogans against top Iranian government officials.

On the same day (December 27), tens of millions of Iranians were on the streets to take part in annual massive processions across the country to mark the martyrdom anniversary of Imam Hossein (AS).

Clashes began after demonstrators started clapping and showing happiness, insulting the mourning people who were also in the streets to commemorate Imam Hossein's martyrdom anniversary.

In response to the Ashoura unrest, millions of Iranians took to the streets on Wednesday Dec. 30, 2009, demanding that rioters be brought to justice.

The Iranian people participating in the Sunday rallies to commemorate the December 30, 2009, rallies carried placards reading 'Death to the US', 'Death to Israel' and 'Death to Britain'.

Back in June 12, 2009, Iran was again under the spotlight for a hot presidential race. Over 85% of eligible voters came to the polling stations to elect a president for the next four years. Incumbent President Mahmoud Ahmadinejad, former prime minister Mir-Hossein Moussavi, former chief commander of the Islamic Revolution Guards Corps Mohsen Rezaei, and former parliament speaker Mehdi Karroubi were candidates, with the first two being the candidates of choice for the majority in the country.

But after people from different walks of life staged major rallies across the country in support of the Islamic Republic and the rule of law as well as the Guardian Council's endorsement of the 10th presidential election, calm was restored in the capital. The largest such rally took place in Tehran on December 30, 2009 with millions of participants, which knocked the steam out of the seditious moves of Moussavi and Karroubi and their foreign backers.

Tags: Amoli Larijani Iran US
Short Link rasanews.ir/201rBg
Share
0
Please type in your comments in English.
The comments that contain insults or libel to individuals, ethnicities, or contradictions with the laws of the country and religious teachings will not be disclosed