Millions converge on Iraq’s Karbala on eve of Arba’een

Rasa - Pilgrims from around the world continue to converge on the holy Iraqi city of Karbala on the eve of Arba’een, which marks 40 days since the martyrdom anniversary of Imam Hussein (PBUH), the third Shia Imam. 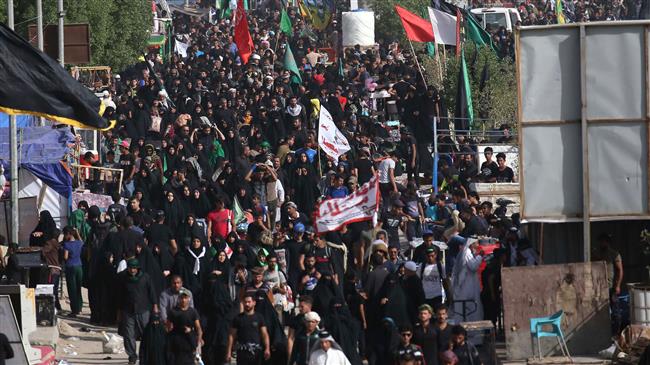 RNA - Shias, Sunnis, and people of other faiths from world countries have been on a spiritual sojourn to the Iraqi city — many from Iran and on foot — since almost three weeks ago.

Karbala is the site of Imam Hussein’s Holy Shrine.

And October 30 is the Day of the Arba’een, when many of the pilgrims hope to be at the shrine to observe mourning rituals.

As of Sunday, Karbala authorities confirmed the entry into the city of over 10 million pilgrims, according to Fars news agency.

At least two million pilgrims have passed border checkpoints from Iran into Iraq.

Iran has established camps along the paths leading to the border with Iraq to accommodate the pilgrims.

Iran’s Islamic Revolution Guards Corps (IRGC) has also set up a field hospital near one border crossing, and, as of Sunday, has provided medical services to at least 5,000 pilgrims.

Many people, mainly Iranians and Iraqis, are doing volunteer work along the routes to Karbala — offering everything from drinking water, sugar dates, meals, and clothing to sewing work and shoe polishing — all of them free of charge.

Arba’een, meaning “the fortieth” in Arabic, is observed 40 days after Ashura, the tenth day of the lunar calendar month of Muharram, when Imam Hussein, the grandson of Prophet Muhammad (PBUH), was martyred along with dozens of his companions at the hands of the tyrant of the time, Yazid I, more than thirteen centuries ago.

Tags: Arba’een karbala Pilgrim
Short Link rasanews.ir/201qn8
Share
0
Please type in your comments in English.
The comments that contain insults or libel to individuals, ethnicities, or contradictions with the laws of the country and religious teachings will not be disclosed