Rasa - Millions of Muslims are flocking to the Iraqi holy city of Karbala to observe religious and mourning rituals of Arba’een, which marks the anniversary of the 40th day since martyrdom of the third Shia Imam, Imam Hussein (PBUH). 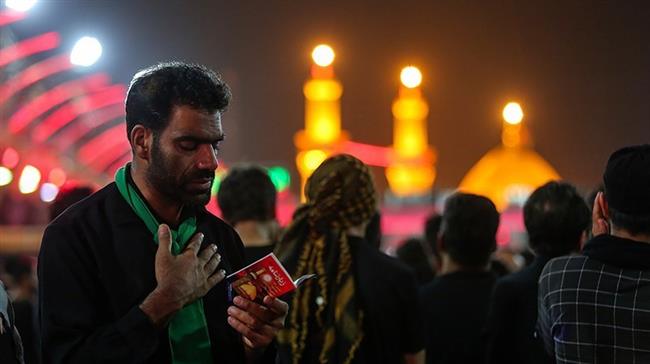 RNA - The occasion is marked all over the Muslim world, but is most impressively honored in Karbala, which houses Imam Hussein’s shrine.

The majority of those heading to the city will walk in its direction from the neighboring holy city of Najaf.

The journey on foot is a token of religious fervor for Imam Hussein and 72 of his companions, who were martyred at the hands of the tyrant of the era more than a dozen centuries ago.

The Battle of Karbala resonates strongly with the Muslim faithful due to the sacrifices made by Imam Hussein and his companions and the egregious outnumbering of the forces they withstood.

The Muslim mourners will gather in Karbala on Tuesday on the day of Arba’een.

In their splendor, the ceremonies are regarded by Muslims as a unique display of their unity in the face of attempts at sowing discord among them.

Thousands of security forces have been deployed along the routes leading to the city.

Around 1.5 million Iranians have so far headed out of the country via three border crossings on the journey to Karbala, Brigadier General Hossein Ashtari, the chief of Iran's Law Enforcement Forces, told Tasnim News Agency on Friday.

Ashtari, who was attending the Mehran border crossing in the western Iranian Ilam Province, said 65 percent of those had crossed into Iraq through the land terminal.

He hailed that continuous alertness by security forces at the exit routes had successfully ensured security there, forestalling any incident.

Tags: karbala Najaf Iraq
Short Link rasanews.ir/201qmi
Share
0
Please type in your comments in English.
The comments that contain insults or libel to individuals, ethnicities, or contradictions with the laws of the country and religious teachings will not be disclosed