Rasa – In an exclusive report for Rasa News Agency, Firas Samuri, a freelance journalist, ‎wrote about the illegal practices of the Kurdish Syrian Democratic Forces against the Arab ‎population in norteasthern Syria.‎ 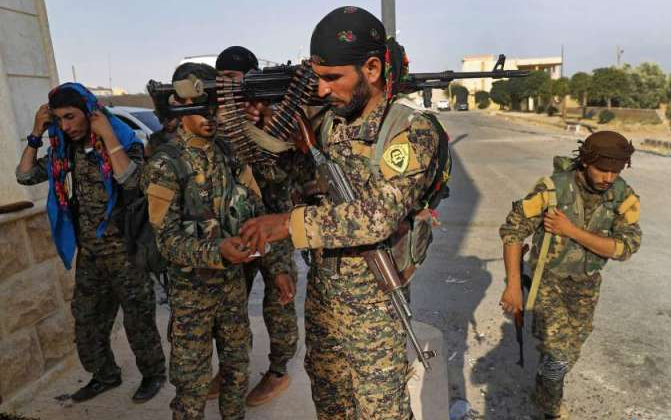 RNA – During the past several months the situation around the Syrian Kurdistan remains ‎tense. The protests of the locals from the city of Manbij in Aleppo governorate against the ‎actions of the Syrian Democratic Forces (SDF) are happening on a regular basis.‎

Last week Asayish, the Kurdish local police forces arrested more than 50 civilians who had ‎been protesting against the closure of the Arab schools and forced mobilization to the side ‎of SDF in Manbij. In fact, the presence of the Kurdish militia in this region is illegal, as in mid-‎June 2018, the United States and Turkey agreed on complete withdrawal of the Kurdish ‎formations from the area to reduce the tensions.‎

It worth noting that the illegal practices of Kurds are also underway in other cities in ‎northeastern Syria both in Raqqa and Hasakah governorates. Under the pretext of fighting ‎sleeping cells of Daesh, Asayish security service personnel burned down some glossary ‎stores in Suwaydan Jazirah village, whose owners had refused to pay taxes in favour of the ‎Kurds. The meetings of locals, which broke out in response to this outrage, were dispersed ‎with the use of weapons. During the action, several people were killed, including women and ‎children.‎

At the same time, according to the local activists, the arrests of local authorities participating ‎in the Syrian governmental local council elections from settlement of al-Khatuniyyah in ‎Raqqah governorate have become more frequent.‎

In addition to the Kurds, Turkey is another party that is involved in destabilizing situation in ‎northeastern Syria. Turkish President during his visit to the U.S. announced about the ‎creation of a number of safe zones within Syria to include the east of the Euphrates River as ‎it happened with the Idlib governorate. The noticeable increase of the Turkish presence near ‎the border with the Syrian governorate of Hasakah speaks in favour of the seriousness of ‎the Ankara decision.‎

It is also noteworthy that the Kurdish militia backed by the international coalition stopped ‎combating Daesh terrorists that call into question the desirability of their presence in the ‎region. Thus, on October 13, 2018, the jihadists attacked the refugee camp in the area of al-‎Bahrah resulting in the capture of 700 civilians.‎

The U.S. policy can explain such behaviour of the Kurds towards the local population. First, ‎the American leadership announced its intention to leave the country after the defeat of ‎Daesh terrorists, and now Washington intends to stay in the country for an indefinite period. ‎Mostly, this kind of actions provokes the anarchy from Kurds, since they understand the ‎presence of Western patrons let them to feel unpunished.‎

The expansion of the Turkish influence will not bring the stability in the region either. ‎However, Erdoğan’s intention can be understood, as he is not ready for any growth of ‎Kurdish influence as well as granting them any political rights. Unfortunately, he also rejected ‎the option of giving them a cultural autonomy.‎

Finally, if Erdoğan begins to implement what he claimed, and the Kurds in turn with the ‎patronage of the Americans continue to create chaos and feel their impunity, it may lead to ‎a new confrontation in the region between them, the United States and Turkey that will ‎adversely affect the course of the Syrian conflict.‎

Tags: Firas Samuri syrian army DAESH Syria ISIS syrian crisis ISIL Syria developments
Short Link rasanews.ir/201qly
Share
0
Please type in your comments in English.
The comments that contain insults or libel to individuals, ethnicities, or contradictions with the laws of the country and religious teachings will not be disclosed